There are several families, that say “oh… I wish I had known earlier, I could have provided the right treatment, could have saved a life, could have altered the diet…”. Retrospection is always good, but why retrospect when you can be aware of the risk of genetic abnormality inheritance beforehand. In today’s world with accelerated discovery and exponential technological advancements, new knowledge is generated by the day allowing us to answer questions sooner than before. The knowledge of genetics aids in explaining, what makes one unique – scientifically differentiating individuals; what is common in family members – identification of family members; Why certain diseases run in families – origin and history of the disease, onset prevention in family members and progeny.

In a country with a population of 1.35 billion and about 4.5 million births per year1, around 1.7 million children are born with birth defects. Most genetic or partially genetics birth defects are commonly seen in developing countries and low-income families2, 43% of India’s total households3. The occurrence of these recessive diseases causes severe financial distress to maintain life especially, in low-income families.

Certain genetic disorders are predominantly seen to occur in populations with a particular geographic ancestry. Common versions of genes are passed down from the ancestors of an ethnic group.4 For example, Tay-Sachs is frequently seen in the Ashkenazi Jewish population or people with French-Canadian ancestry.4 Some communities have worked tirelessly towards eliminating the occurrence of these genetic diseases. One such is the Jewish community and their efforts to eliminate Tay-Sachs. Tay-Sachs is a severe debilitating autosomal recessive disorder unnoticed among carriers but fatal in all, with both parental copies of the gene. In the 1900s the Jewish Rabbi Josef Ekstein founded the Dor Yeshorim committee, to prevent the incidence of genetic disease among the Jewish population. The ultra-orthodox Dor Yeshorim program compares the genetic testing results of prospective couples and rabbis counsel marriage-consenting couples to discontinue plans if they both carry the genes for the same disorder. These measures have significantly reduced Tay-Sachs among the Jewish population.5,6

Similarly, some genetic disorders commonly seen in India include – Beta-Thalassemia, Haemophilia A, Sickle Cell Anemia, Cystic Fibrosis and Spinal Muscular Atrophy.7 Consanguineous marriages among the Asian population leads to increased risk of genetic abnormalities. In India, one out of 20 neonates is hospitalized due to a genetic disease. There is an awakening need to educate couples regarding the risks and consequences of being carriers.8

Let’s take a step back and understand what it means to be a carrier.

Carrier Screening is a genetic test that analyzes blood, saliva or buccal swab samples to screen for mainly autosomal recessive genetic abnormalities before pregnancy or while pregnant. Every individual has 23 pairs of chromosomes and hence carries two copies of each gene. Certain changes in the genes are deleterious and may cause genetic diseases. In case of autosomal recessive diseases, both copies of the gene need to have the change, individuals with one copy of the gene change are called “carriers” and most likely will not have any disease symptoms but can pass on the change to their children to cause diseases.9

Let’s consider the example of Haemophilia A, Haemophilia is a bleeding disorder that is a result of a missing or deficient protein (factor VIII) required for clotting.

How can one inherit Haemophilia?

When either the father or mother is a carrier of the Haemophilia variant in the gene, they could pass the change to any of their children. The child would be at risk of inheriting the disease, only if both the parents carry the same change. The flow chart below explains the probabilities if both parents are carriers. 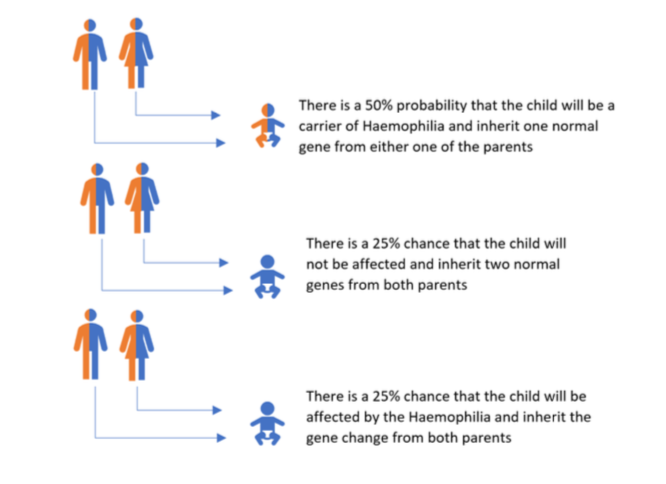 Some of these genetic conditions are enfeebling and incapacitating. Most such disorders do not have a cure, some disorders do have effective treatment but may require lifelong infusion and monitoring of expensive drugs. An ounce of prevention is better than a pound of cure.10

In one of my interviews with Dr. Jennifer Scull, Assistant Professor Baylor College of Medicine and Laboratory Director, Baylor Genetics, she explains the advantages of being informed.

• Understand the risk of having affected children
• High medical expenses
• Bring down the quality of life
• Treatment options
• Allows one to consider options such as
• Preimplantation Genetic Diagnosis (PGD),
• Prenatal testing
• Choose not to have kids
• Adoption
• Terminate pregnancy
• IVF options
• Allows on to be emotionally and monetarily prepared for medical management of
affected child

Dr. Scull is the Division Director, Carrier Screening at Baylor Genetics, one of America’s leading molecular diagnostics laboratories. She reviews and interprets several hundred cases for very severe disorders to ensure families get the most accurate information and the best medical support. She suggests that pre-conception is the best time to get a carrier screen as it provides many more options. She also suggests that it is quintessential to inform other related family members and siblings of the carrier screen results to make sure others of childbearing age are informed and to keep good records for the future.

Dr. Scull strongly suggests couples go through genetic counseling before and after any genetic test. Online platforms such as consult-a-gene provide an opportunity for couples to discuss their doubts with world-class genetic counselors and receive insights on the different options and assistance in selecting the most appropriate genetic tests.

There is a preconceived notion that genetic testing is expensive and is not readily accessible, which is partly true, but with time and improved technology, genetic tests such as carrier screens are becoming more affordable and accessible. In 2018, the government of India proposed a draft policy proposing compulsory genetic testing of all pregnant women to prevent inherited disorders.

Like in the case of the Ashkenazi Jewish community, it is the responsibility of the entire community to understand the background and consequences of genetic diseases and work together towards eradicating such inherited disorders from the community, country, and world.