We’ve been taught in middle school that our cells contain DNA in the form of genes, and these genes dictate how our cells function. We then learned in high school of the central dogma- the rule that DNA is used to create RNA, which then becomes proteins and proteins do the actual work in the cell. But there’s one part of the story that’s missing. If all our cells contain the same DNA, how do they look and act so differently? What controls the difference between a skin cell and a stomach cell? Is there a way we can harness that for our benefit?

Epigenetics, from the Greek word “epi” meaning “on top of”, talks about changes to our genome that are independent of the gene sequence. These are changes that dictate which genes in our cells are expressed. Not all genes are expressed in every cell- it is the combination of expressed genes that acts as the differentiator of cell types. Different sets of genes are expressed in different cells, resulting in variations in the outcome. Genes that are turned off are said to be “silenced”, and those turned on are said to be “expressed”, and this control is done in different ways.

Each cell in our body contains up to 6 feet of DNA if stretched out, and this packaging feat is accomplished by coiling DNA around positively charged histones. 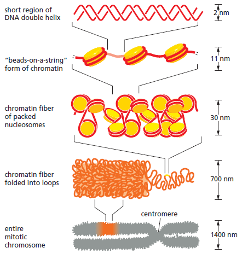 Figure 1: Packaging of DNA by wrapping around histones, which are further coiled to give chromosomes. A schematic of how 6ft of DNA fits into a single cell. Image from Molecular Biology of the Cell, B. Alberts.

Epigenetic modifications refer to the changes that are made to the DNA or histones, by adding different chemical groups called tags, that modify how tightly DNA wraps around histones, or directly bind to the DNA (like methyl tags), preventing other proteins from binding to it, thus, silencing it. Think of your genome as a textbook with each page being a gene; epigenetic tags would be the scribbles or post-its on borders of the page telling you what to learn and what not to. The exact mechanisms of this regulation are well studied and widely documented. 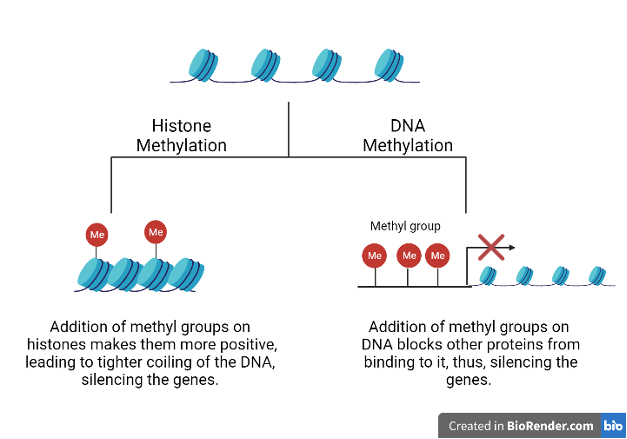 Can we harness this? How?

Some epigenetic tags regulate genes in a way that results in disease, and targeting these harmful tags is known as epigenetic therapy. It also includes artificially modifying gene expression to express specific genes, resulting in the desired outcome. Some applications of epigenetic therapy are:

1.Cell Differentiation for organ regeneration: Damage of small hair in the inner ear is one of the primary reasons for hearing loss. Scientists found that these hair cells could regenerate during fetal development but lost this ability on maturation because genes responsible for making hair cells were silenced in the precursor cells. Scientists at the University of Southern California targeted the methyl groups on the histones that were responsible for this silencing, thus restoring the capability of precursor cells to form hair cells.

Dr. Neil Segil, a lead scientist of the study, said, “Similar epigenetic modifications may also prove useful in other non-regenerating tissues, such as the retina, kidney, lung, and heart.”

2. Cancer Treatment: Cancer cells are characterized by epigenetic dysregulation. When cells become cancerous, genes that have anti-tumor functions are epigenetically silenced. Treatment involves targeting the enzymes that perform this silencing, resulting in the “un-silencing” of these genes.

3. Mood and Mental Health: Several mental health disorders like depression, anxiety, and bipolar disorder are caused in part by dysregulation of gene expression. For instance, Major Depressive Disorder is characterized by downregulation of the serotonin transporter (SERT) due to DNA methylation. Therapy involves inhibiting the enzymes that methylate DNA to prevent the silencing of necessary genes.

Epigenetics responds directly to our environment making it an ideal interface between the two, facilitating a better understanding of how we are directly impacted by our surroundings and lifestyle. A group of scientists even looked into how our epigenome reflects whether or not children with anxiety respond to CBT (Cognitive Behavioural Therapy). It was found that responders (children who showed an improvement following therapy) showed an increase in DNA methylation while non-responders showed a decrease. The existence of this correlation between methylation levels and response to treatment demonstrates how epigenetics can be used to predict treatment outcomes for different diseases.

Epigenetics is a relatively new field of science, but it’s all around us- from genetically identical honey bees that differ only through epigenetics, to calico cats that have different fur colors, and identical twins that are genetic clones of one another. With recent discoveries showing enormous potential, and high-quality research being churned out continuously, we know now that epigenetics holds immense potential waiting to be unlocked. Technology and innovation are only going to get better, and this will allow us to apply epigenetics in wider, and more pertinent areas.