Little is known about life and the organisms that reside in the depths of oceans. The darkness of the deep-sea harbors innumerable microbes and flora that can be of countless use for human benefits. The vast refuge of these organisms can be the source of most prescribed and used drugs in the medical field i.e. antibiotics. Deep-sea is a major earth environment serving as investigation footprints for the development of antimicrobial compounds from marine microorganisms. At depths over 3000 meters, lies the underexplored remote regions where exquisite life prevails in the dark. The deep sea is one of the less explored and extreme environments for land plants and animals including human beings as it is characterized by high hydrostatic pressure, low temperature, and lack of light.

In the last 50 years, over 30,000 marine natural products (NPs) have been found and approximately 2% of those have been isolated from deep-sea organisms. Among microbial NPs, antibiotics are one of the most interesting molecules, particularly for biotechnological and pharmaceutical applications. The discovery of novel antibiotics is necessary to counteract multidrug-resistant bacteria and the exploitation of underexplored deep-sea microorganisms, such as bacteria, fungi, and microalgae and their related products could lead to the isolation of new antibiotics. Marine microorganisms represent a significant source for the discovery and development of new antibiotics due to their rich biodiversity and genetic capacity to produce unique metabolites. Most of these metabolites are potent antibiotics, predominantly biosynthesized by bacteria belonging to high GC Gram-positive bacteria. 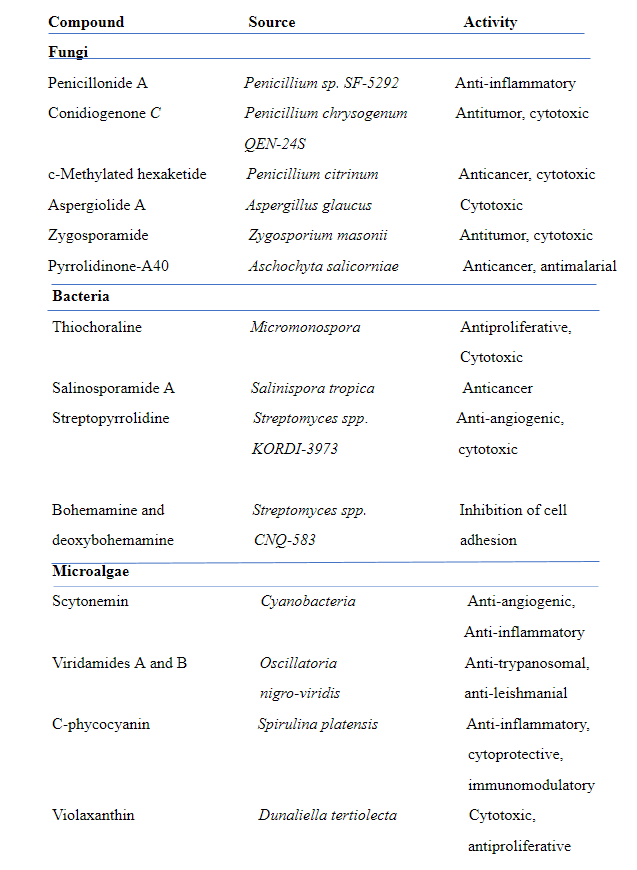 Role in Treatment of Inflammation and Cancer

Besides antimicrobial properties, marine microorganisms have been known to provide notable cures against different pro-inflammatory and immunopathological diseases through their derived compounds and products. It has been proven that oncogenesis, autoimmune diseases, and several inflammatory disorders have a common etiological basis, which is chronic and uncontrolled inflammation. The inflammatory process is involved in cancer progression and aggravates autoimmune syndromes. At the same time, inflammation has a protective function during an immune response to pathogens and is an active process required for the efficient functioning of the immune system. Thus, the inflammatory response seems to be a double-edged sword that contributes to the immune response but could also lead to the development of immunopathology.

NPs from marine microorganisms are serving as promising therapeutic alternatives in the treatment of immunopathologies, inflammatory diseases, and cancer. Marine microbial pharmacology has experienced rapid growth in the past 40 years, particularly in the last decade. Several compounds of different and complex structures have been isolated from various microbial sources. Beyond classical antibiotics isolated from marine fungi and some selected microbial strains, new glycosidic, polypirrolic, and halogenated strains have been obtained and purified from these groups of microorganisms demonstrating novel and potent pharmacological properties in various models of cancer, immunity, and inflammation. Due to the high pharmacological potential of the marine microbial-derived products, these compounds have played an important role in the therapeutic intervention of many complex diseases and still, today represent a crucial alternative to treat different immunological, inflammatory, and malignant conditions.