In 1882 Sydney Ringer laid the foundation for discovery of cell culture by keeping a frog’s heart beating; in vitro and an experiment by Harrison led to the development of cell culture. Following which the 20th century saw tremendous development in cell culture technology. From production of monoclonal antibodies to development of human stem cell line, many milestones were achieved. And finally, in the 70s, groundbreaking studies liberated the cell culture world from the traditional 2d monolayer to the intricate 3-dimensional world.

What makes 3D culture more preferable? Well, the simplest possible answer is – 3D cell culture accurately depicts the in-vivo microenvironment of our cells which the 2D methods doesn’t. In 2d culture, cells are grown in a substrate to which they adhere, and a growth medium (specific for a particular cell type) containing essential nutrients and growth factors is provided, and the cells have access to homogenous amount of media. This is not how the cells that make up our body are. In our body, cells are anchored to ECM components, which provides structural support to the cells and depending on the tissue, its ECM stiffness and its proximity to blood vessels; the oxygen, nutrients and pH gradient varies considerably. This variation in gradients in turn influences vital events like cell signaling and cell motility. 2D cell culture also fails to mimic some crucial features of tissue, like cellular heterogeneity, proliferation rate, gene expression and polarity. 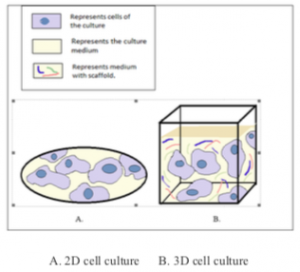 ECM components are the key players of 3D culture methods: ECM are tissue specific and are composed of a wide array of molecules including collagens, elastin, glycosaminoglycans, growth factors, proteoglycans; each of which plays a crucial role. For example, collagen and fibronectin are known to influence cell migration whereas integrin dependent signaling cascade influences cell proliferation and polarity.

In an experiment, 2D culture of human breast epithelial cells resulted in tumor cell like growth whereas the same cell when cultured 3 dimensionally, the cell growth was back to normal. This undoubtedly highlights the importance of ECM in regulating complex cellular responses. Over the past decade different methods for culturing cells three dimensionally have been developed. They can be broadly classified as –

1.Scaffold based techniques Here cells are cultured in presence of cell specific ECM like matrices. Today a plethora of ECM like scaffolds have been designed and incorporated in cell culture techniques, each according to the specific cell. The biomaterial used for scaffold fabrication varies from natural polymers like agarose, & chitosan to synthetic polymers like poly glycolic acid & polyorthoester. Currently Hydrogels are gaining popularity as biopolymer for scaffold fabrication due to their biocompatibility and resemblance to ECM.

2.Scaffold free techniques Here cells form aggregate called spheroids, which secrete their own ECM components. They are best suited to study tumor cell physiology. The only struggle is to keep the cells from settling down. This can be achieved by Agitation, magnetic levitation, hanging drop plate method etc.

Organ on chips and the future – Even after years of developing different 3D culture techniques, models which resemble the organ level architecture were something yet to be achieved. Pioneered in 2010 by Donald Ingber, OOC completely changed the scenario. To understand what OOC is, pick any organ of your body. Done? Now imagine a miniature version of it in a transparent and small chip. That’s what they are- microfluidic devices that mimic miniature organs; rather functional unit of organs, fascinating right?

The success of OOC has opened up a world of possibilities. Researchers are aiming to develop Human on chip by integrating multiple OOC in a single microchip, where each OOC represents an organ and are connected via a microfluidic circulatory system. The successful fabrication of human on chip could provide us a peek into the human physiology, drug efficacy, drug toxicity and lot more. Recently ‘personalized medicine’ has created quite a buzz. The idea is to develop organ on chip specifically according to the patient’s physiology and then use the OOC for drug development.

Though the idea seems to be promising, as of now it is in its infancy. Bringing an end to animal testing doesn’t seem impossible now however. This are just a glimpse of what lies ahead. We are yet to see how things unfold in the coming days. The quest for a better model, a better technique continues. Who knows, maybe you will bring the next revolution.

GENETICALLY MODIFIED FOOD SHOULD BE LABELLED