CRISPR/Cas systems are extremely varied adaptive microbial defense systems that are utilized to protect most archaea (90%) and many eubacteria (40%) against invading viruses and plasmids. These mechanisms enable the cell to distinguish between incoming ‘foreign’ and ‘self’ DNA. CRISPRs (clustered regularly interspaced short palindromic repeats) are made up of short repeating sequences that are separated by short spacer sequences of the same size. CRISPR repeats and spacers range in lengths from 23 to 47 bp and 231 to 72 bp, respectively. There might be many CRISPR loci in the bacterial genome. These sequences are used as recognition elements and on adding new spacers new matching viral or plasmid genomes are recognized and destroyed.

Antibodies, sometimes referred to as immunoglobulins, are proteins that bind to pathogens. This tells immune cells to go after the infection and kill it. When a virus creates an infection, it takes time for T and B cells to react to new antigens. These cells develop a memory for the virus after being exposed to it, making them ready for the next infection.

Some T and B cells transform into memory cells as part of the adaptive immune response. Memory cells tend to stick around, and if a person is infected with the same virus again, these cells can combat the illness swiftly and effectively. Similarly, when a bacterium is attacked by a bacteriophage, it has no defense mechanism in place. As a result, a tiny Cas protein selects a portion of the phage’s DNA (protospacer) and transports it close to the CRISPR locus, where it is incorporated into the CRISPR site. A crRNA (CRISPR RNA) is made from those loci and it, along with other proteins, recognizes the corresponding sequence contained in the invading phage DNA and degrades it. The CRISPR/Cas system works similarly. 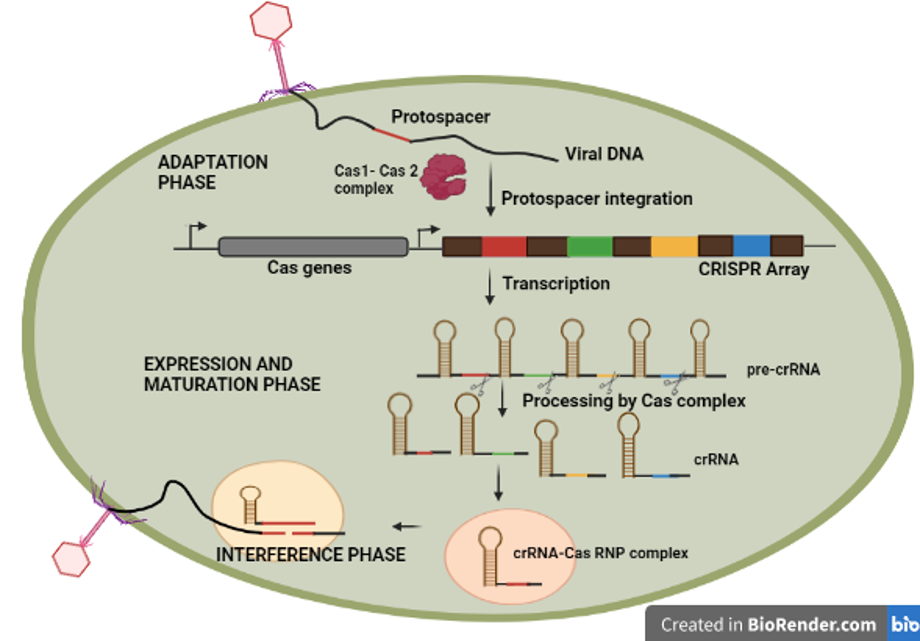 In short, the CRISPR system consists of an enzyme known as Cas9 and a piece of RNA called guide RNA (gRNA) which introduces a change or mutation into DNA. Enzyme Cas9 acts as the molecular scissors that can cut the two strands of DNA at a specific location in the genome so that genes can then be added or removed. gRNA or guide RNA consists of a small piece of pre-designed RNA located within a longer sequence of RNA scaffolds. The longer RNA part binds to DNA and the pre-designed RNA sequence guides the Cas9 enzyme to the right location of the genome. This mechanism makes sure that the Cas9 protein cuts the desired region in the genome. The protein Cas9 follows gRNA to that same location in the genome sequence and cuts across both strands of DNA. Naturally, the cell recognizes that the DNA is damaged and ultimately its repairing system gets active.