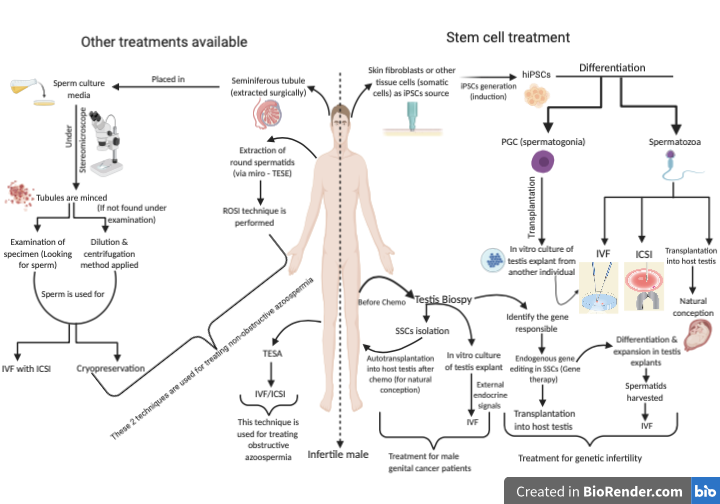 Infertility can be defined as the inability to accomplish pregnancy after an adequate time of sexual intercourse with no contraceptive measures taken. Globally 15% of the couples are infertile, adding up to 48.5 million couples. Male infertility is a multifactorial disorder; it’s common causes including history of testicular problems, azoospermia, age above 40, gonadotoxic treatments, environment, reproductive cancer, etc. Scientists have explored various therapeutic measures for male infertility and one of them is stem cell therapy since significant changes in basic properties of stem cells can give rise to diverse cell lineages. For the formation of a functional male germ cell in vivo, the spermatogonia (primordial germ cell) goes through defined steps. This process is collectively called “spermatogenesis” and occurs in the seminiferous tubule. It in turn creates a basis for reprogramming stem cells to functional haploid male germ cells.

The journey of stem cells started in 1978 when the blood stem cells were discovered in the umbilical cord blood of humans. Along with the advent of technology in 1981, mouse embryonic stem cells were derived for the first time from the inner cell mass of a mouse blastocyst and grown in vitro. In the late ’90s, researchers discovered the potential of stem cells to differentiate into different cell lineages. Stem cells are self-replicating, self-renewing, undifferentiated cells and have the potential to produce specialized cells under desirable conditions. They show different types of potency, namely they are totipotent, pluripotent, multipotent, oligopotent, and unipotent. The most hyped potency under the research area is “pluripotency”, because of its capability to give rise to three primary germ cell layers of the early embryo.

Human Embryonic Stem Cells (hESCs) are pluripotent in nature, but ethics are the major concern while working with them. Hence scientists took a step ahead, to reprogram somatic cells to induced Pluripotent Stem Cells (iPSCs) since hESCs and iPSCs resemble closely in morphology, genomics, pluripotency, and ability of differentiation. Skin fibroblasts, adipose stem cells, melanocytes, and keratinocyte can be used as iPSCs source. The reprogramming of somatic cells is performed with ectopic expression of primarily four transcription factors: OCT4, SOX2, KLF4, and MYC.

Before getting into the description of the treatment of male infertility, here is the gist of the process of spermatogenesis (Spermatogonium(2n) -> 1°Spermatocyte(2n) -> 2°Spermatocyte(2n) -> Spermatid(n) -> Spermatozoa(n)). Bone Morphogenetic Proteins and Wnt Signaling pathway play an important role in male germ cell specification and differentiation. Along with that, SOX17 (SRY-Box Transcription Factor 17) is a major controller of Human Primordial Germ Cell fate. The Primordial Germ Cells (PGCs – in a diploid form) acts as precursor of germ cells subsequently, after meiosis, give rise to functional haploid spermatozoa, which in turn fuse with egg, to form progeny by the process of fertilization.

The ongoing studies based on “stem cell & male infertility” will further help in interpreting the signaling pathway and molecular mechanism involved in male infertility as it is considered idiopathic. Adding onto it, endogenous gene editing may stop the inheritance of genes involved in infertility, however as of now, gene editing has many ethical issues involved to it. Hence, these optimized gametes may give rise to healthy progeny, hopefully without genetic disorders. These techniques form a solid base for other infertility-based issues and their future implications in investigating other germ cell-based pathways and functioning. Clinical treatments for male infertility are still obscure, hence the derivation of a functional haploid male germ cell from stem cell will open another door for it. In the near future, this will give expectancy to infertile male patients to pass on their traits and to continue the legacy.

The Ancient Viruses Lurking in our Genome