With crime-solving drama shows gaining popularity, we just expect a detective to walk into the crime scene, find all the clues and solve the murder within minutes. The episode is wrapped up within an hour by eventually catching the suspect, making it seem like a piece of cake. But in reality, certain cases remain unresolved for several years. Recently an arrest was made in the 1972 murder of a teen girl with the help of genetic genealogy. In November 2020, Identifinders International was contacted by the Naperville Police Department as a last resort to try to solve the case using forensic genetic genealogy. Identifinders International offers Y-DNA and autosomal DNA investigative genetic genealogy services to law enforcement agencies, coroners, and medical examiners for cold case homicides, military identifications, historical cases, adoption searches, and more with the help of Microarray and Whole Genome Sequencing. Over the next six months, Identifinders faced numerous challenges in creating viable genetic genealogy data since the DNA sample of the suspect was severely degraded and was of very low quantity, consisting of only 360 picograms of DNA. But once the data was uploaded to the genetic genealogy database GEDMatch, the case was solved in just two hours. The breakthrough is being attributed to the science of genetic genealogy. The use of this technique in forensics was pioneered with the notable case of the Golden State Killer, Joseph James DeAngelo, who was a serial rapist, and murderer.

Genetic genealogy combines the use of genealogical DNA tests with traditional genealogy methods to infer the relationship between individuals. This is done by cross-checking the DNA evidence with the ancestry records. Genetic genealogy uses autosomal DNA (atDNA) single nucleotide polymorphisms (SNPs). This is done because unlike mitochondrial DNA or Y chromosome DNA, atDNA is passed on by both males and females which allows us to compare any two individuals. Though alleles can be shared by chance at one or a few SNPs, it is highly unlikely for two unrelated people to share a long stretch of DNA. Hence, only segments above a certain length are counted. The unit used to measure the length of these shared segments is centimorgans (cM). The total number of centimorgans shared across all chromosomes helps to determine approximately how closely related two people are. The following image demonstrates how with each generation, shared segments of DNA on a single chromosome are broken up, leading to shorter shared segments for more distant relatives. 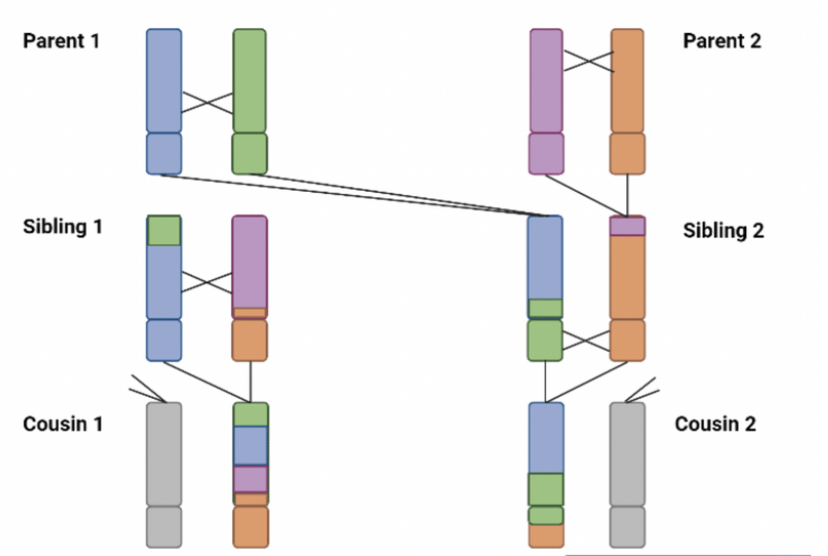 Genetic genealogy is an important tool in criminology and is revolutionizing forensic investigations. It has helped to solve many cold cases by generating leads on unknown suspects. Below we have a step-by-step process demonstrating how genetic genealogy can be used to solve a crime:

There’s more to Genetics than Genes