Probiotics are live beneficial microorganisms which when taken into sufficient dosage, provide health benefits to humans. Due to increased levels of health issues, demand for functional foods and dietary supplements is increasing where probiotics play an important role in treatment. Several foods involving dairy products i.e. milk, curd, cheese are considered good sources of probiotics due to the presence of lactic acid bacteria. Lactic acid bacteria are Gram-positive, cocci or rod-shaped, catalase-negative, and are Generally Recognized as Safe (GRAS) organisms.

Maintenance of samples in adequate anaerobic conditions is the important step before isolation. Curd samples are aseptically transferred into sterile saline and are gradually diluted using ringer solution. Then, samples are incubated anaerobically for 24-48h at 370C onto sterile de Mann Rogosa Sharpe (MRS) agar plates using the spread plate technique. Isolated colonies are transferred into MRS broth followed by purification by streaking twice onto sterile MRS agar. For further use, colonies are stored in MRS agar stabs at 40C with sub-culturing of 8-week intervals.

Molecular identification is carried out using 16S rDNA gene sequencing. It includes extraction of genomic DNA followed by polymerase chain reaction (PCR) and these PCR products are electrophoresed using agarose gel electrophoresis. Further, visualization is done under UV light and PCR products are sequenced using the sanger method. Then, 16S rDNA gene sequences are searched across in the GenBank database for the possible match via the BLAST tool.

The probiotic potential of LAB is mainly checked via their ability to adhere to intestinal epithelial cells and tolerate acidic pH, bile salts. Acid tolerance is tested in MRS broth with pH adjusted to 3.0 during incubation at 370C for 2h. For the bile tolerance test, isolates are inoculated into MRS broth with 2% sodium acetate and are incubated at 370C for 6h. After incubation, growth is monitored at OD 620.

For antimicrobial activity, LAB isolates are incubated at 370C for 48h and after incubation, cells are filtered using the centrifugation process. Here, the pH of the supernatant is set at 6.5 and then filtered using a 0.22µm filter to get cell-free supernatant (CFS) which is further used as an antimicrobial agent against several test organisms. Here, the agar well diffusion method is used and lastly, antimicrobial activity is evaluated by measuring the zone of inhibition values as mentioned in (Figure1). 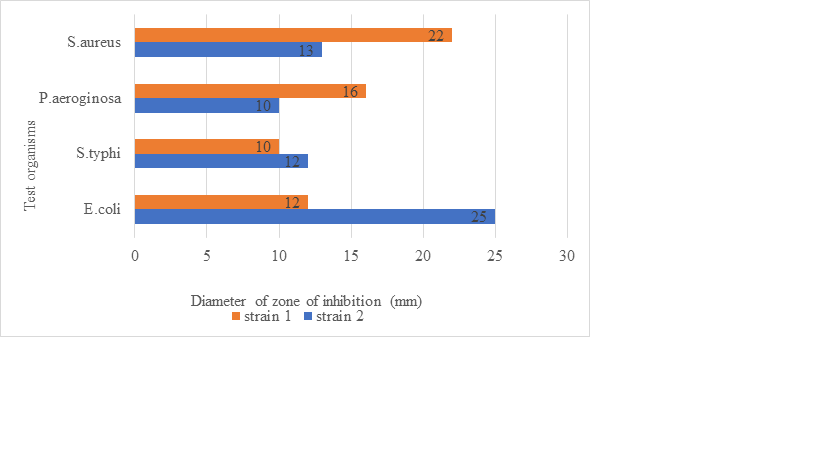 Figure 1: A graph of antimicrobial activity shown by two different strains of LAB against test organisms

Antibiotic susceptibility test is performed using determination of minimum inhibitory concentration (MIC) values of several antibiotics using agar dilution method by spotting samples onto sterile MRS agar plates. Plates without antibiotics are used as control. Due to probiotic properties such as resistance to bile salts, resistance to acidic pH, antimicrobial activity against potentially pathogenic microbes, adherence to human epithelial cells, ability to stimulate the immune system, more research studies have been carried out which led to the conclusion that LAB present inside curd samples can be used for the treatment of health issues related to digestion of food, growth of undesirable microbes in the digestive system, high cholesterol level, Crohn’s disease, diarrhea. In short, the probiotic potential of LAB of curd causes our body to be neutral and helps in building up a healthy society.

Homonymous Hemianopsia: The vision in fragments