A typical Mediterranean diet covers food products cultivated around the Mediterranean Sea. Mediterranean diet includes items like grains, vegetables, fruits, olive oil, nuts, beans, spices, cheese, eggs, meats and fishes. One of the primary sources of fat in this diet is olive oil. A high degree of adherence to the traditional Mediterranean diet has been associated with a reduced risk of overall mortality caused due to cardiovascular, cancer and neurodegenerative disorders. This kind of diet is highly efficacious in combating cardiovascular morbidity and mortality. But a negligible amount of data is available regarding consumption of olive oil and progressive decline of cardiovascular disease. In a particular case study (Fernández-Jarne et al., 2002), it was observed that consuming high concentration of olive oil rich diet correlated with a reduction in the relative risk of myocardial infarction. A particular study in Greece (Trichopolou et al., 2003) showed that ingestion of Mediterranean diet including olive oil, majorly rich in monounsaturated fatty acid (MUFA), corresponds to an overall reduction in mortality rate due to a higher ratio of MUFA to saturated fatty acid (SFA). Additionally, there is a vast amount of data signifying beneficial consequences of olive oil on secondary end points for cardiovascular disease. The main concerned or important question arising from a certain study is termed as the primary endpoint, while secondary end points are an indicative of the other relevant questions and outlooks for the same study. These secondary end points provide an assurance that olive oil consumption not only lowers the disease risk but also aids in promoting better and healthier lifestyle.

Olive oil has an instrumental role in progressively combating the cardiovascular risk factors. This effectiveness is not only mediated due to the exorbitant amount of MUFA seen in olive oil, but also several other components that exhibit potential features known to contribute towards minimizing the risk factors developed by cardiovascular disorders. One of the natural products, derived from the olive fruit exhibiting bioactive characteristic, is virgin olive oil, which is rich in phenolic compounds and MUFA. Therefore, an exorbitant amount of oleic acid intake could not be the sole factor exemplifying the health properties of olive oil.

Olive oil intake has certain other benefits as well, which tend to support the healthy monitoring of the body system, which is represented in a tabular form.

Previously, no prevention trial has ever been performed to assess the association between following a Mediterranean diet rich in olive oil and incidence of ischemic heart disease (IHD). A considerable study (Keys et al., 1986) revolving around seven countries showed that countries where the fat composition mainly constituted olive oil produced lesser rates of coronary heart disease. A very important cohort study (Trichopolou et al., 2003) found that the Mediterranean food pattern exhibited safety and protection from IHD mortality. Among the cases, only 54 coronary deaths resulting from IHD were considered.

Following this, various other studies have been undertaken which indicate the beneficial outcomes of olive oil intake and the protection conferred against overall mortality resulting from IHD. This mortality is not only restricted to its occurring frequency but also corresponds to the quality and timeliness of medical care. A trial was conducted in France where it was observed that having olive oil in the diet pattern rendered protection against the risk factors which could arise due to the recurrence of acute myocardial infarction (AMI) in previous survivors.

An experiment was set up to estimate the relative dietary fat composition, as a part of the Lyon Diet Heart Study. The study revealed that the fat content in the experimental diet was 30.5% of energy intake as total fat (12.9% MUFA) which was significantly less when compared to Mediterranean diet that contains 35–40% total fat and 15–20% MUFA. Several methodological caveats have been raised on the Lyon Diet Heart Study, which involve small indicative experiments in batches.

A particular research study indicated that among the people belonging to age group of 55-80 years, those who consumed fruits, vegetables, fishes along with olive oil and nuts as a part of the Mediterranean diet were less prone to such kind of heart ailments in comparison to those who lacked such kind of diet. The study was depicted in a graphical form provided below (Estruch et al., 2013). 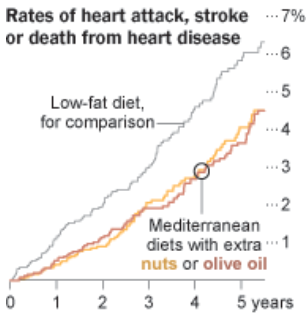 Various novel strategies and therapeutic approaches have been developed in the last twenty years that has contributed to a decline in mortality and morbidity rates due to AMI. Prevalence of cardiovascular disease (CVD) has been reported to elevate in spite of decline of age-related CVD deaths, the phenomenon commonly termed as CVD paradox. This might lead to a stinging burden on the growing economy due to the increase in number of surviving patients aligning with the quite expensive new technologies and treatments. This arising problem is resolved with the help of cardiovascular health promotion and prevention of CVD phenomenon. As a matter of fact, this phenomenon is challenged with the problem of implementation of preventive actions at the population level. The formulation of Mediterranean diet as an effective tool of health promotion and nutritional education provides a potential cost-effective intervention. Despite high concentration of fat in the Mediterranean diet, this kind of fat is highly preferable for cooking purpose and therefore, its consumption is good for health. Olive oil is a much better option for cooking terms than other varieties as the steaming intensifies the flavor and perpetuation of the diet which is highly savory.

A survey on a section of the population who prefer olive oil rich Mediterranean diet, over other diets, has been performed. The survey indicated that these people exemplify higher nutritional education and bring about promotion of healthy lifestyle. Earlier trials that were performed indicated a strong association of weight loss with low calorie Mediterranean diets in comparison to standard diets with lower fat. The complete food pattern of a person can be influenced by including olive oil in his diet and promoting the Mediterranean diet through behavioural intervention. Enhanced level of education has been observed to cohort with higher intake of olive oil in diet. Globally, there has been considerable amount of increase in the availability of olive oil in the last 40 years, especially in Mediterranean regions as well as parts of Northern Europe and Southern Europe.

We anticipate that the expected outcomes from future studies will enhance and improve the cardiovascular health and reinforcing the utilization of olive oil and Mediterranean diet structure may have a beneficial impact on the healthy progression of human population.