“I would like to acknowledge Bidisha Biswas for helping me with this article.”

Parkinson’s disease- the second most widespread neurodegenerative disease affecting the medulla oblongata, olfactory bulb, and substantia nigra, is characterized by the degeneration of dopaminergic neurons and subsequent deficiency of the neurotransmitter dopamine in these brain areas. Whilst the aetiology of Parkinson’s Disease (PD) has remained unfathomable, research studies have suggested oxidative stress and mitochondrial dysfunction be the pivotal causes for the onset of PD. 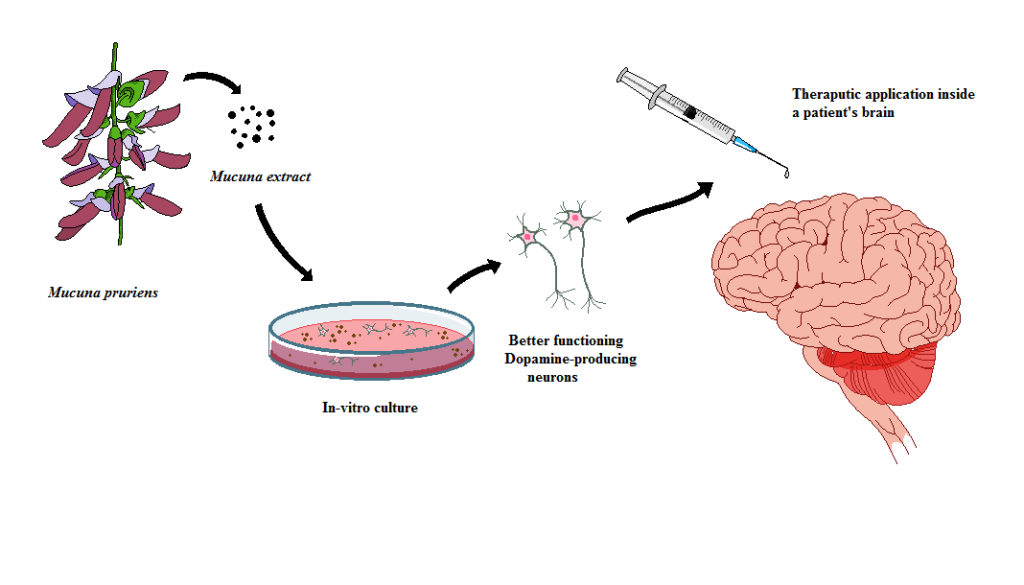 Although treatment with anti-PD medication “levodopa”, a dopamine precursor, has helped to improve the symptoms in patients, these dopaminergic medicines (levodopa and carbidopa) become less effective in disease progression and produce long-term complications involving involuntary movements; Evidence for these medicines to treat non-movement symptoms of PD is weak. Anxiety, irritability, depression, pain are examples of symptoms that are not treated with PD-specific medications. Whilst levodopa happens to be the go-to therapy for PD, the marketed form of levodopa is unaffordable and unavailable in many low-income countries. The failure of the current treatment options to find a long-term solution to PD has thus resulted in a search for alternative, cost-effective treatments.

Why Mucuna pruriens could be seen as a potential alternative therapy for PD?

A double-blind clinical and pharmacological study tested the anti-parkinsonian eﬀect, tolerability, and levodopa pharmacokinetic proﬁle of an MP powder compared to synthetically manufactured levodopa/carbidopa. The study found that MP powder led to a faster onset of eﬀect, longer “on” time, and higher peak levodopa plasma concentrations compared with levodopa/carbidopa. In another study, as an efficacy outcome, MP was found to be non-inferior compared to levodopa in terms of UPDRS-III change percentage from the 90 and 180 minutes after treatment intake. This study demonstrated that the acute intake of MP powder at both high and low doses is superior to levodopa in terms of all efficacy and safety outcome measures.

A recent research study found that MP significantly expanded the lifespan of the mutant drosophila model of PD and fully restored olfactory response and motor movements in those mutant flies. The study also found that MP could also rescue the damaged mitochondria, antenna lobes, and thoracic ganglia. Their analyses proved that MP extracts successfully restored BRP and tyrosine hydroxylase expression to a level that is found in normal wild-type flies.

Now, an imminent question arises that why MP is believed to be a better candidate than Levodopa if both the drugs provide the same L-Dopa?

An imminent problem is that long-term use of levodopa in progressing PD can lead to dyskinesia or uncontrolled, involuntary movements. Levodopa not only results in long-term motor complications but also fails to provide any psychological benefits to PD patients. This is where MP emerges as a better drug candidate. MP seeds contain genistein and polyunsaturated fatty acids which support its antiparkinsonian and neuroprotective actions and phytic acid that has antioxidant and iron sequestrant activity have been reported to suppress methyl-phenyl-tetrahydropyridine induced hydroxyl radical generation. MP effectively protects both plasmid and genomic DNA against L-DOPA along with copper-induced DNA damage.

It is highly unfortunate that India, being the habitat of this herb, has not even conducted a single clinical or preclinical trial on Mucuna pruriens to test its efficacy on PD patients. The number of research labs that are conducting experiments to test out the power of MP in animal models is also a handful, let alone translating them into the patients. To this end, we try to suggest two novel approaches that could be implemented across various labs to examine, validate and consolidate the potential of MP as a drug candidate-

1. Taking a skin cell from a PD patient and then converting it into dopaminergic neurons via the induced pluripotent stem cell (iPS) technology, will have the same damaged genes for PD in those neurons. These neurons could then be cultured with MP seed extract to check whether MP can rescue the functionality of those neurons and reproduce dopamine. Another approach would be to mimic the damaged genes in iPS cells that are known to cause PD (PINK1B9 being one such example) via gene knock-out, produce dopaminergic neurons from them, and then examine whether MP extract can rescue neuronal functionality in those damaged neurons.

2. Organoids have emerged as a powerful tool in the past few years to preclinically/clinically model diseases and design drug targets, especially for human diseases. Mid-brain organoids could be produced in the lab by taking a skin cell from a PD patient. These mid-brain-specific organoids derived from PD patients carry the LRRK2-G2019S mutation that recapitulates the PD phenotype. The MP extract could then be administered in the 3D culture of these organoids to validate the efficacy of rescuing the damaged gene.

3. Clinical trials are the gold standard to consolidate the validation of any drug in the whole organism. Although the above-mentioned in vitro studies might provide good inception and proof-of-concept into the neurological effects of the MP seed, randomized double-blind preclinical and then clinical trials need to be performed to logically reason the outcome of MP versus Levodopa.

Conclusion: Any realm of research can only be navigated through extensive experiments, proper controls and efficacy of the product in question- only after which it could culminate into a rationale. Undoubtedly, MP holds significant promise in the treatment of PD, even more so than the available drugs on the market. Not only increasing the Dopamine but also alleviating long-term motor symptoms and providing the patient with psychiatric benefits, MP has proved its efficacy time and again.

While modern science has offered us a plethora of synthetic chemicals in the form of drugs, we believe it is equally important to unravel the mysteries of the plants that have been doing wonders for thousands of years. Through exploring these avenues of research, we believe, the significant and potential impact of this powerful herb can be rendered into the patients who are looking for a long-term solution to PD and eventually improving their lives far better than what they are suffering now.

Homonymous Hemianopsia: The vision in fragments