Currently, one of the leading causes of death in the US is heart disease. This along with diabetes and obesity is shifting the focus towards various new diets and exercises to help lose weight and control these conditions. In the past decade, a lot of research work has been focused on understanding how the metabolism in our body can be increased, leading to the discovery of Irisin.

Irisin is a hormone, which was discovered in 2012, in the skeletal muscles of mice by Bruce Spiegelman and colleagues at the Dana-Farber Cancer Institute in Harvard University. The name Irisin was derived from the ancient messenger Greek goddess Iris to refer to its role as the muscles’ messenger to fat cells. It is a 122 amino-acid, exercise-induced, myokine (a cytokine synthesized and released by muscle contractions). Irisin is a product of the cleavage of Fibronectin type III domain-containing protein 5 (FNDC 5). The function and structure of irisin are considered to be similar in many mammals with a 100% similarity between mice and humans.

Irisin is mainly secreted in the skeletal muscles, especially in the perimysium, endomysium, and nuclear parts. Apart from these, it is also expressed in adipose tissue, pancreas, sebaceous glands, and cardiac muscle.

In our body, we have two kinds of fat or adipose tissue namely-

Irisin belongs to the class of adipo-myokines which acts on both adipose as well as muscle tissues and is a thermogenic protein that promotes energy expenditure by WAT browning (i.e. WAT is converted to BAT). It has been discovered that irisin is present in the human body naturally, and that physical activity like cardio exercises influences the level of irisin circulating in the body.

According to a study published by Steward et al. exercise induces the transcriptional regulator PGC-1α (peroxisome proliferator-activated receptor-γ co-activator 1α) which is responsible for the synthesis of FNDC5. More FNDC5 leads to a greater titer of irisin in the body by cleavage. This leads to an increase in the number of brown fat cells as along with irsin, FNDC5 also influences the expression of UCP1 (Uncoupling Protein 1 or Thermogenin). UCP1 is a mitochondrial carrier protein, found in BAT, and plays a role in non-shivering thermogenesis. 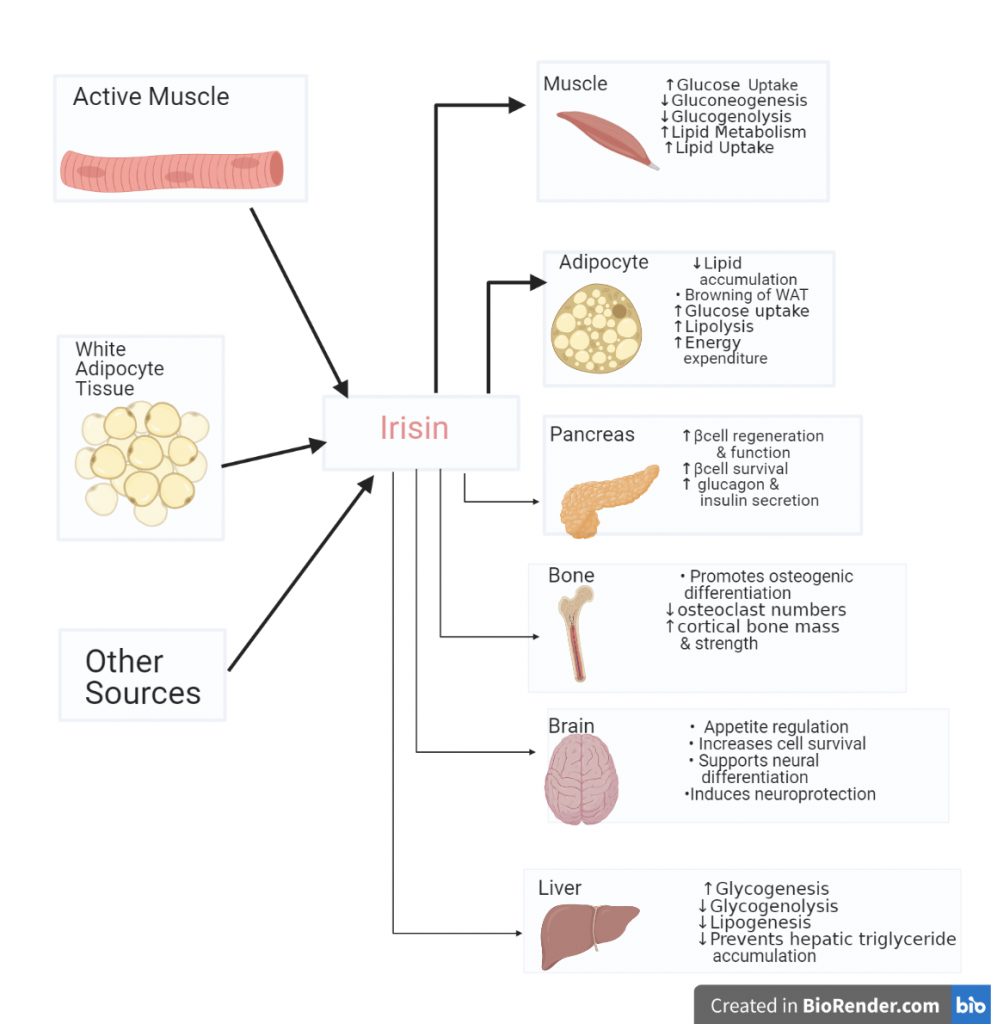 The discovery of irisin is still very recent in the scientific community. Not much is known about the hormone and its various functions and research is still being carried out at Harvard University, University of Bari Aldo Moro (Italy), Duke University, and Scripps Research Institute to name a few, to find out its potential. However, it has been established that irisin levels can be increased through exercise and are being looked at as a treatment for obesity and obesity-related complications. This breakthrough discovery is likely to pave the way to a healthier world and future.

Author Biography: I am currently pursuing my B.Tech in Medical Biotechnology from Pune. I have a keen interest in vaccine technology especially cancer vaccines and wish to pursue a career in the same and hopefully cause a difference and help people one day.