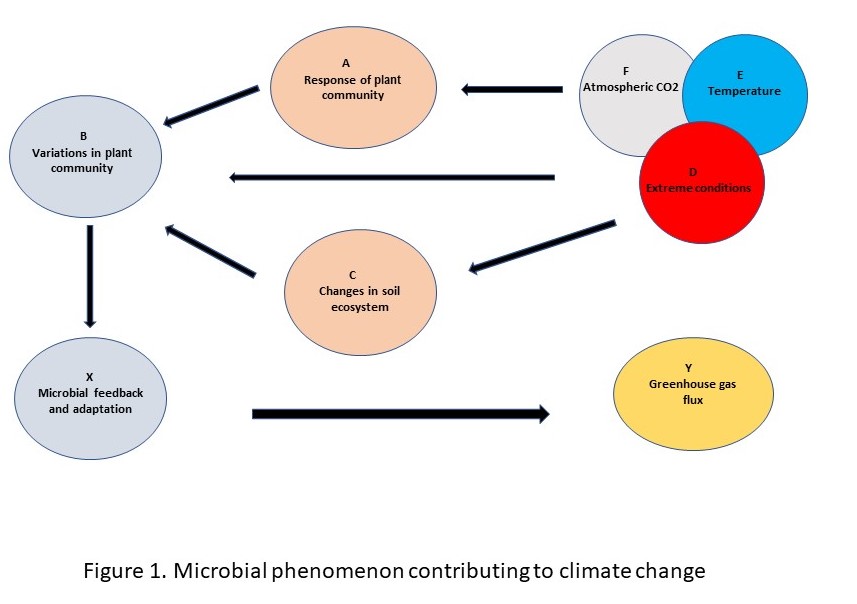 Climate is one of the imperative factors in our environment and we need to have predictions about its behavior to understand how safe we are. It affects our food sources, our health and our homes. It would be foolish to be this scientifically and technologically advanced and not take full advantage of exploring climate. Earth’s climate is crucially influenced by the living world evidenced by the paramount impact made by its tiniest dwellers- the microbes. Bounteous of historical evidences and literatures ascertain the impact of microorganisms on climate and their intricate relationship. Earth is the reservoir of estimated high numbers of microbes, almost half of its biomass, thus prompting us to ponder upon its function and bonding with the climate. Since microbial activities are associated with production and consumption of various constituents of global elemental cycles like Carbon cycle, Oxygen cycle etc.; the overall impact of microbial activities on the concentration of certain important atmospheric gases like carbon dioxide and eventually the climate is an acute, vital, and incredibly challenging task to address. Soil microbial respiration, which encompasses carbon dioxide flux from the soil to the atmosphere, is a contributing factor towards uncertainty in future climate predictions and carbon cycle feedbacks. Further, the key microbial mechanisms and its association with climate warming is poorly perceived and decoded till date. Complicacy lies in the fact that life is not stagnant. Ever-changing climate compel the living organisms to evolve, limiting our knowledge of today to be applied for tomorrow’s problems as the evolved microbes may affect the climate differently. The climate being a long-term representation of weather on a large scale is therefore, sometimes modeled as a stochastic process when approximating very complex processes.

Total respiratory activity of soil (Rt) is defined as the combined effect of autotrophic respiration (Ra) throughout plant root growth and root biomass maintenance, and heterotrophic respiration (Rh) during microbial decomposition of litter and soil organic matter (SOM). Microbes can swiftly regulate their respiratory responses to changing temperatures through longer periods by acclimatizing their metabolic pathways and community dynamics. It is known as the thermal adaptation of soil respiration. The concept of global thermal adaptation of soil respiration has immense importance due to its inverse relationship with positive feedback between climate warming and ecosystem CO2 release.

Exponential rise in soil respiration as affected by increasing temperature has been demonstrated through several short-term investigations and this relationship has formed the basis to parameterize the ecosystem and Earth System Models (ESMs). It is anticipated that climate warming will spark a heightened ecosystem respiration (ER) eventually adding to the global C cycle, provided the near exponential short-term relationship of soil respiration and temperature holds true for the everlasting longer periods. Although key procedures are needed to integrate these microbial phenomena into climate models for better understanding of such intricate processes.

What exactly is being inferred by the statement of incorporating microbes into climate models? Let us have a better understanding. The Scientists, Geologists and Mathematicians make a model-based prediction system by organizing all kind of informations pertaining to a particular system into several pathways of cause and effect, defining the limitations elaborated mathematically applicable to the modeled system. After organizing all insights and assumptions, a model can be used to test whether the assumptions are correct by incorporating microbial phenomenon into climate models.

A recent research focused on Gene-informed decomposition model that predicted lower soil C loss owing to persistent microbial adaptation to warming. The study revealed a constant reduction in temperature sensitivity of the soil microbial respiration by 12.0 ± 3.7% in a span of 7 years of warming in a temperate grassland ecosystem. Additionally, it also proved that the thermal adaptation of microbial respiration persists for longer periods where shifting microbial communities play significant roles in regulating such phenomena. Self-reliance in model simulations was significantly augmented via integrating information retrieved from metagenomics-based microbial functional genes. These were indicative of microbial thermal adaptation leading to substantially less heterotrophic respiration and thus less soil carbon loss. It is concluded that the significant positive feedback of soil microbial respiration in response to climate warming may be less than previously predicted, conditional to the fact that if such microbe facilitated diminishing effects arise mostly across diverse spatial and temporal scales.

You Inspire Us- Interview with Bhavna Pandya