Microorganisms play a vital role in the physicochemical processes of organisms. Research on gut microbiota is vital for an in-depth understanding of relationships between gut microbiota and host. These relationships are diverse, which develops throughout the lifetime. Different anatomical niches of an organism host unique microbiomes, but the majority of microbiota reside in the gastrointestinal tract and play core roles by maintaining symbiotic association with their respective hosts. The microbiota has the potential to influence, or be influenced by, the myriad of physiological processes of the endocrine system. The differences in microbial communities within the host gut correlate with hormone metabolism, behavior, and altered gene expression in endocrine tissues. Recently, microbial endocrinology has been recognized as an interdisciplinary area that interlinks microbiology, endocrinology, and neurophysiology. Gut microbiota can sway physiology by establishing communication between gut and brain. The main objective is to provide a paradigm, to understand the interaction between the micro-organisms and their host, concerning the biological aspect. Direct action of the microbes on gut mucosa and enteric nervous system increases the output of the microbiome, to reach beyond the GI compartment.

The gut is a highly innervated organ that possesses its nervous system known as the enteric nervous system which is in constant communication with the central nervous system(CNS). The innervation of the gut is neither homogeneous throughout its length nor its microbiome. Hence, it is crucial to understand how one microbial species that may produce a neuroactive compound may have a behavioral effect in one part of the gut but not in another. Various malfunctions and deficiencies of microglia have been reported across various brain regions.

Hence, maintaining gut microbiota homeostasis is very important to health. Researchers are trying to unveil the signaling mechanisms to exactly know how the microbiota alters the gastrointestinal function and host behavior by the gut-brain communication. The gut microbiome maintains homeostasis including brain development. The microbiota is essential for the proper development of the mucosal and systemic immune systems as well as nutrient uptake and metabolism.

In animal models, the microbiome affects the hypothalamus-pituitary-adrenal (HPA) axis, the stress response, and behavior, which sequentially affect the feeding behavior and homeostasis of the host. Chronic infection also alters gut function, feeding patterns, anxiety, and depression. Therefore, the gut-brain region is seen as a striking target for conventional treatments against a wide range of disorders. The HPA axis and part of the limbic system are predominantly involved in memory and emotional responses and are considered as the core stress efferent regions. The HPA axis monitors and integrates gut functions as well as links emotional and cognitive centers of the brain with peripheral intestinal functions through the enteric nervous system. Imbalance in the composition and diversity of the microbiota can decrease the intestinal barrier protection and favor infectious pathogens. 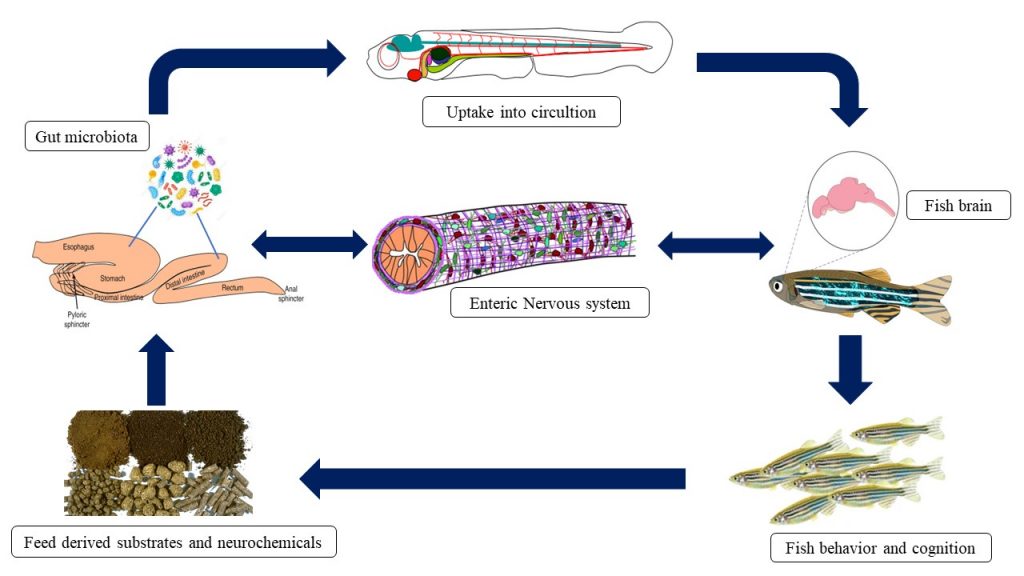 Bacterial sensing and synthesis of neurohormone and neurotransmitter

The study of the production and recognition of neurochemicals that are similar in structure to those synthesized in the vertebrates is termed microbial endocrinology. Asano and colleagues were the first to establish the capacity of the microorganisms for in situ production of biologically active neuroendocrine hormones. The capacity of microbes to produce neuroactive components depends on the availability of suitable substrates. Therefore, the role of diet is an important production of neuroactive compounds. This also applies to in-vitro studies of a specific species’ ability to produce neuroactive compounds. The microbiome produces a wide range of neuroactive substances such as catecholamines, histamine, and other compounds that can stimulate the host’s neurophysiology, either through direct interaction with the receptors present within the gastrointestinal tract or following passive diffusion through the gut wall and entering into the portal circulation. There is growing recognition that bacteria and yeasts contain many similar neurochemicals as hosts. For example, the production of γ-aminobutyric acid (GABA), the primary inhibitory neurotransmitter, is produced in large milligrams by several bacteria present within the gastrointestinal tract.

Production of dopamine, needed for proper neuronal functioning as well as being the substrate for the production of the stress hormone norepinephrine is made by Escherichia spp in the gut. Maintaining the gut microbiota homeostasis is very important to health. Several fundamental studies have revealed different potential mechanisms that allows the microbes to interact with host tissues to regulate their energy metabolism.

Gotta catch them all: Microplastic