But in the case of homonymous hemianopsia, injury occurs to either side of the occipital lobes in the brain, blocking the respective vision capabilities. For instance, if the left side of the brain encounters damage, then the person develops an inability to visualize the right side of any object and vice-versa. This leads the individual’s vision to vertically segregate every object in complete two halves, forecasting only one side of every object and the other side to be completely black. This defect is a problem in the brain indeed, primarily and majorly in occipital lobes, but not in the eyes.

Stroke is the major cause of HH, followed by trauma and tumors. Unilateral damage occurring in the retrochiasmal visual pathway leads to bilateral vision loss further affecting the contralateral visual field. This visual loss follows the midline of the visual field. The most remarkable damages occurring in the brain resulting in HH are lesions in the occipital lobe (45%), followed by damage to the optic radiations (32%). The remainder is the consequence of lesions of the optic tract (10%), lateral geniculate nucleus (LGN) (1.3%), or a combination of several areas (11%). 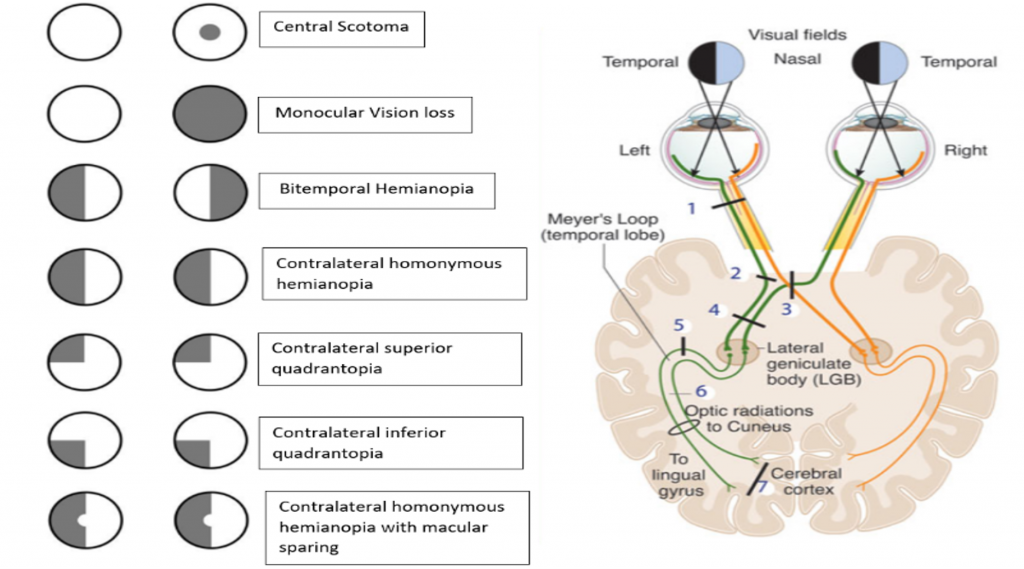 1. A complete HH affects the entire hemifield of both eyes. This can occur with a lesion anywhere posterior to chiasm and is never further localized based on visual field appearance.

4. Generally, 50%–60% of the visual cortex of the posterior occipital lobe represents 10°–30° of central vision. But large macular representation and the dual blood supply to the posterior occipital lobe out-turn in sparing the central 5°-25° of the visual field on the affected side. This results in the discrete inability to visualize the respective side of objects clearly, maintaining the vertical meridian.

HH leads to visual hallucinations that appear in the form of lights, shapes, or geometric figures or as the image of a recognizable object. It causes driving problems, frustrations during reading as 100% visibility is not permitted. Additionally, encounter any sudden accident or fall due to not noticing any obstruction that the blocked part of the vision is supposed to visualize.

This study signifies that stroke causes most HHs from lesions in the occipital lobe that generally do not produce other neurologic manifestations. Maximally caused by cerebral infarction and by primary intra-parenchymal hemorrhage. Presently MRI of the brain is used to diagnose the underlying location and cause of the brain injury. HH can interfere with rehabilitation and is associated with a worse functional outcome in patients with strokes and trauma if goes unrecognized after the severe strokes. But the increasing health care facilities may navigate through the depth of the disorder and help improve the vision defaults for the patients to render normal life.