It’s incoming, said one of the microbes.

I cannot wait to get my hands on this new land: said another microbe.

As the gushing wastewater came in, the operator and the engineers, usually dull expressed during their daily mundane task, are excited today. Along with standing microbiologists, they are here to observe the new process they are trying to test at the field level. 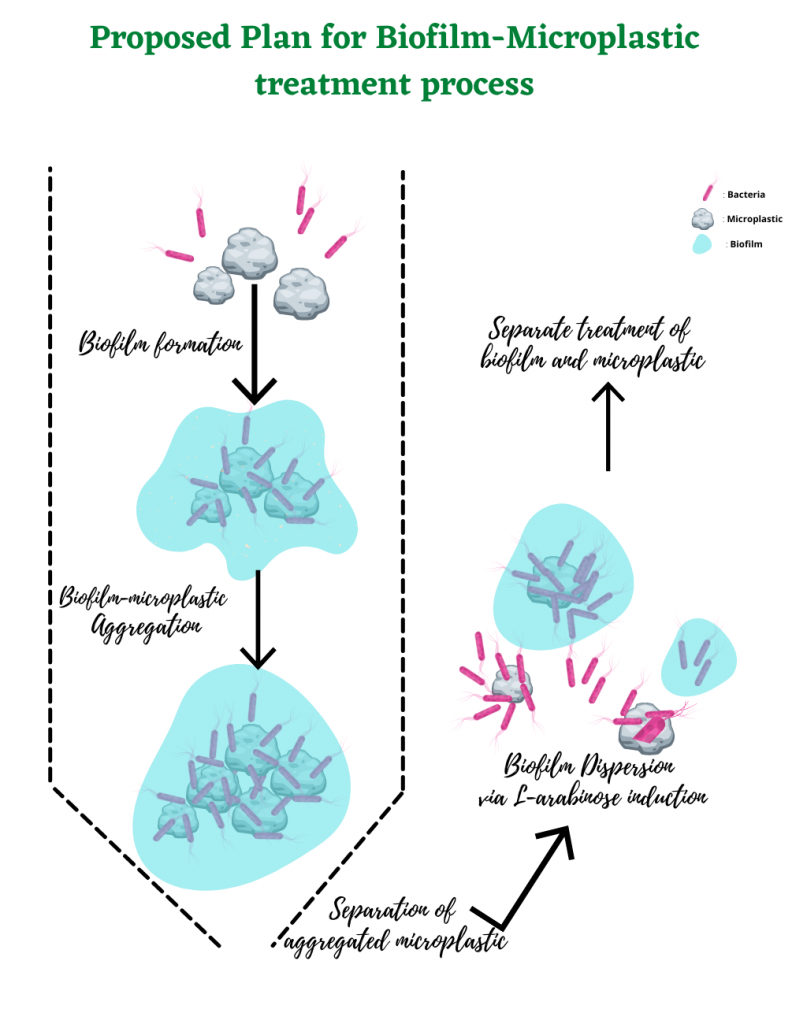 This new process called “CLAMP” Catch Lump of All Microbial biofilm & microplastic aims to capture the microplastic released by human activity during the wastewater treatment with the help of microbial biofilms before it reaches local rivers. This invention could pave the way for sustainably lowering plastic pollution levels in the long run by simply using something found in nature.

OK. The above process may still be fictitious but based on the laboratory work of Liu and colleagues [1]; it might soon become a reality. What is microplastic, and why does it need our attention?

Microplastics are plastic fragments, usually smaller than 5mm, that are extremely difficult to treat. Microplastic is released into the environment during the production and breakdown of plastic materials such as grocery bags, plastic bottles, toys – or during everyday activities such as washing nylon or plastic-based polymer made clothes or using personal care products with microbeads.

Although microplastics are small in size, the risk they pose to the environment is huge. They are not readily biodegradable and hence can persist in the environment for an extended period. When in the environment, microplastic absorbs toxic chemicals such as pesticides, drug residue, heavy metal, etc., due to their high absorbent capacity and surface area. It leads to bioaccumulation of chemical toxicity in humans and other organisms in the ecosystem after prolonged consumption of such microplastic. Such microplastic also disperses in various water systems, including oceans, through wastewater, endangering marine animals who eat them and eventually enter the food chain.

Estimates suggest that an average-sized wastewater treatment plant (WWTP) serving roughly 600,000 households will discharge up to 3,000,000 microplastic particles into the environment each day. According to the International Maritime Organization, microplastics were found in more than 114 aquatic species in 2018. Salt, milk, fruits, vegetables, etc., also have been found to consist of microplastic. The potential health risks of microplastics are also becoming more apparent day by day with recent studies. For example, research has found that microplastic, when consumed, sticks around the human organ, affects the shape of human lung cells, and causes immune cells to die three times faster and more. Most Wwtps are not designed to remove microplastics, so they are constantly being released into the environment. Thus, there is an urgent need for the treatment and recycling of microplastic.

Biofilms are populations of bacteria that tend to group and stick to surfaces with the help of a self-produced extracellular matrix of biopolymer. Biofilm grows everywhere, from our teeth to bathroom to lakes, in almost any environment with a combination of moisture, nutrients, and a surface.

Liu and the team led by James Kar-Hei Fang and Professor Song Lin Chua at Hong Kong Polytechnic University have taken advantage of this sticky exopolymeric substance produced by biofilms to create microbial nets that can immobilize microplastics. They have engineered the bacterial Pseudomonas aeruginosa biofilm found in all ecosystems to colonize microplastics. In a bioreactor, the biofilm captures microplastics floating in the water, aggregating them, and making them heavy, so they eventually sink to the bottom. Then, using a biofilm-dispersal gene, a “capture-release mechanism” is developed that allows the researchers to release the microplastics from the biofilm, which can be later recovered for recycling.

Researchers have demonstrated the potential application of this biofilm technology in controlling microplastics pollution in seawater samples collected near a sewage outfall. However, the experiment is still at the preliminary stage, carried out as a proof-of-concept test in a controlled lab environment and not in the ocean or sewers. Also, Pseudomonas aeruginosa is a pathogenic bacterium and probably cannot be used in large-scale projects. Nevertheless, the researchers are confident that the method can be replicated in wastewater plants or other watery environments using natural biofilm-forming bacteria. This process is an innovative and exciting application of biofilm engineering to address the plastic pollution crisis.

Future: Treating both pathogenic biofilms and microplastic together?

The next phase of the research planned by Liu and colleagues will involve isolating and identifying natural biofilm-forming isolates with increased ability to colonize and form biofilms on microplastics, moving the proof-of-concept from the lab to an ecological setting.

However, there is another issue involving microplastic and biofilm.

Dung Ngoc Pham and the team at the New Jersey Institute of Technology have shown that microplastics can become ‘hubs’ for antibiotic-resistant bacteria and pathogens to grow in the form of biofilm once they enter the WWTP. This biofilm allows pathogenic microorganisms and antibiotic waste to attach and interact. In findings published in Elsevier’s Journal of Hazardous Materials Letters, researchers found that specific genes known to play a role in antibiotic resistance were up to 30 times higher while living as a biofilm on microplastic. They also found eight different species of bacteria enriched on microplastic, out of which two were emerging pathogens typically linked to respiratory diseases. Bacteria Novosphingobium pokkalii, which is being further studied, was a key initiator in forming the sticky biofilm that attracts such pathogens. Such pathogenic biofilm associated with microplastic can allow them to survive disinfection processes and cause a health hazard along with significantly increasing treatment costs.

Both microplastics and antimicrobial resistance biofilms are a nuisance to the environment and human health. The above two research could suggest a new outlook for solving both these problems in WWTP. Understanding antimicrobial resistance and the microorganism responsible for biofilm development will further help develop a “capture and release” mechanism for microplastic capture, which would in turn help to immobilize pathogenic biofilm.

Specific biofilm “on” and “off” genetic controls could be designed by further understanding the developmental process leading to biofilm formation. The “on” switch can trigger capture genes in microbes to form a biofilm on the microplastic, aggregating them in a specific chamber. The “off” gene could release microplastic from the biofilm, both of which could be treated independently.

It could be possible that soon, the researcher would say “Gotta catch them all” for capturing the microplastic similar to what Ash used to say for capturing Pokémon.