Protein production has been of great interest to the biologics industry for a long time. Natural proteins serve as an important source of therapeutic agents. While many of these natural proteins can be used for effective medical treatments for a wide range of ailments, the problems associated with poor biophysical and biological properties have limited their applications. As a result, engineering proteins with improved biophysical and biological properties is of great importance.

In recent decades, the biopharmaceutical industry has significantly turned its therapeutic antibody production towards mammalian cell expression systems. The industry has adapted glycoengineering and cell engineering techniques for improving the glycosylation profiles for enhanced therapeutic activity. The presence of glycosylation machinery within these systems, and the fact that monoclonal antibodies represent the vast majority of new therapeutics today, has largely influenced this new direction. Advancements in ‘Omics’ (genomics, transcriptomics, proteomics, and metabolomics) technologies have recently given rise to new possibilities in improving these expression platforms and significantly developed new strategies, in particular for CHO (Chinese Hamster Ovary) cells.

The market value for biologics has increased since 2017 (US$121 billion) and is expected to reach US$310 billion by 2023. The major portion of these is the recombinant proteins being produced by mammalian cell expression with post-translational modifications in their glycosylation states.

Studies suggest (Ashwell and Harford, 1982) that improved glycosylation profiles can enhance the recombinant protein properties such as stability and half-life in blood circulation and also decrease its immunogenicity. The most commonly used cell line in the expression system is the Chinese Hamster Ovary (CHO). It is used for 70% of the biotherapeutic productions, extensively monoclonal antibodies (mAbs).

GLYCOENGINEERING BASED ON MAMMALIAN CELL LINES 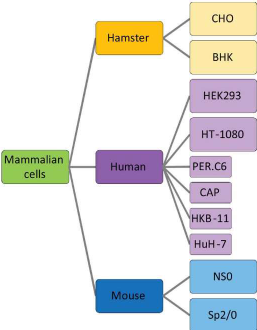 Since the advantages outweigh the disadvantages, CHO cells have become one of the most widely used mammalian cell expression systems for the production of glycoproteins.

These recombinant glycoproteins have human-like glycan sequences that have a higher advantage of being compatible and bioactive with human hosts. Various gene amplification systems have been devised and used in CHO cells, enhancing titer yield, specificity, and productivity. In 2015, 13% of the latest biologics approved were recombinant proteins produced by CHO cells.

On the other hand, CHO cells are incapable of producing some of the human glycosylation types such as α-2, 6-sialylation, α-1,3/4-fucosylation, but produce glycans that do not occur in human cells, like N-glycolylneuraminic acid (Neu5Gc) and galactose- α-1,3-galactose (α-gal) as low as 0.2% to 2%. CHO cells show limited ability for gamma-carboxylate recombinant proteins such as clotting factors, though it has been achieved by metabolic engineering techniques.

A study (Ficher, et al, 1995) showed that the co-expression of furin was not shown to allow the production of fully cleaved or activated von Willebrand factor at an industrial scale, thus stating that proteins being produced for proteolytic activities may not always be activated or cleaved when produced by these CHO cells.

Apart from CHO cells, many other mammalian cell lines have been utilized for protein glycoengineering, with the more frequent ones being mouse myeloma cells NS0 and SP2/0 (Lifely et al., 1995). The advantages of those cells for glycoengineering are almost like those of CHO cells, i.e., they are also relatively easy to use and provide higher yield of proteins. Their disadvantages are also similar to those of CHO cells, that is, the engineered glycoproteins produced by the cells are in the form of heterogeneous mixtures, and may contain traces of non-human monosaccharides like α-Gal and Neu5Gc, etc.

Over the years, many cell engineering tools such as CRISPR/Cas9 and Recombinase Mediated Cassette Exchange (RMCE) technologies have been used to increase titers by optimizing selection markers, gene expression, cell growth, and proliferation or protein folding and secretion. Besides, glycoengineering strategies have also been devised to reduce fucosylation or increase sialylation. Furthermore, these techniques will bring a valuable contribution to the advancement of research and development in the near future.

Author Biography: Keertipriya Bellary, Biotechnology undergraduate student. Currently pursuing a bachelor’s degree in biotechnology, have sufficient knowledge and practical skills related to the subjects.
In the course of the internship, I have worked on “Mammalian Cell Expression Systems”.

From Binary to Quaternary: 0,1,….A,T,G,C: An alternative for mainstream archival storage