Introduction
To date, only 5 of 37.7 million patients all over the world have been cured of HIV-AIDS. The human immunodeficiency virus (HIV) infects CD4 cells (called T helper cells), which help to fight off diseases and infection. Since HIV binds to our immune cells it becomes difficult to get rid of it, as it uses the machinery of our immune cells itself to replicate. But, with the introduction of CRISPR-Cas9 technology, evading HIV completely doesn’t seem to be as difficult as before. These technology-inducing deletion mutations in HIV coreceptors CCR5 and CXCR4 genes can induce resistance to HIV.

Mechanism of HIV entering into T helper cells
The initial stage of infection starts when HIV sets foot into a host cell. The main prey of HIV is CD4 cells, coreceptors CCR5 and CXCR5 present on these cells are utilized by HIV to get inside cells. The very first stage of a virus entering into CD4 cells is the adherence of virion (an entire virus) to T-helper cells. This very adherence brings Env protein (encoded by env gene that helps in the formation of the viral envelope, further allows HIV to attach to cells) closer to a targeted cell and then binding to its CD4 receptors. This further leads to the binding of coreceptors CCR5 or CXCR4. Thus, the binding of coreceptors fastens the fusion of cell and viral membranes. This further allows entry of viral nucleoids and then the cycle of viral replication gets started.

CRISPR-Cas9 Technology
CRISPR-Cas9 technology is a genome-editing tool that is highly efficient compared to previous DNA editing techniques and has a myriad of applications. This technique consists of two main molecules that edit the targeted DNA. One of the key molecules is an enzyme called ‘Cas9’ which acts as molecular scissors that can cleave DNA strands at a particular location. The other molecule is a piece of RNA termed guide RNA (gRNA), it is a synthetic RNA composed of scaffold sequence which is essential for Cas-binding and user-defined 20 nucleotide spacer which describes the genomic target needed to be altered. 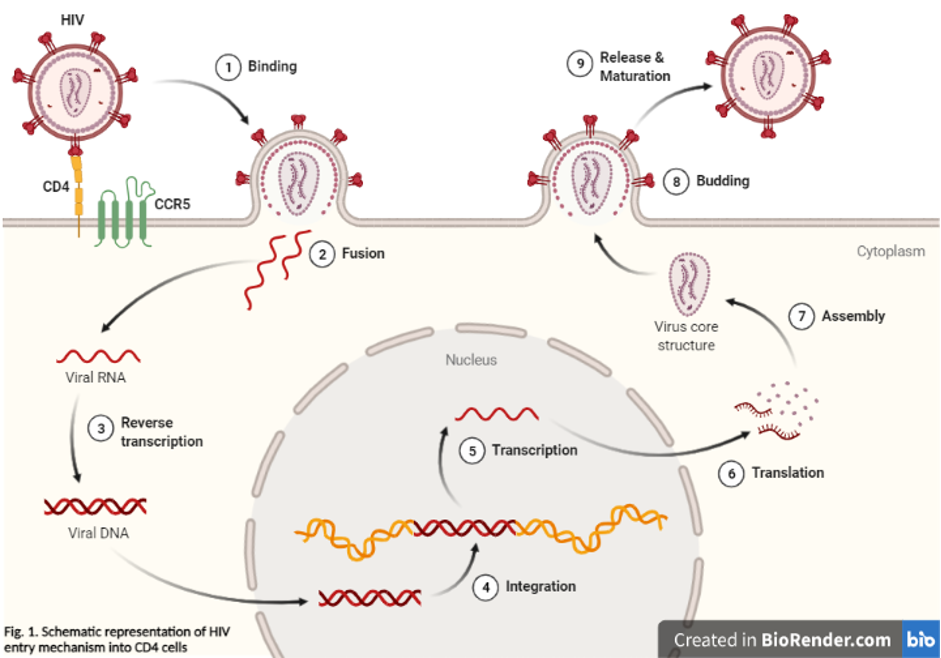 Moreover, we can change the genomic target of Cas protein by just altering the target sequence present in gRNA. This assures that the Cas9 enzyme cleaves the genome at a precise point.

CRISPR-Cas9 Technology and HIV binding coreceptors CCR5 and CXCR4
Scientists have been working towards new therapeutic approaches to eliminate HIV without a need for daily medications and therapies.

Various gene-editing tools have been studied and experimented with by researchers which include Zinc Finger Nucleases (ZFN- this system can target specific genomic sites), Transcription Activator-like effector Nucleases (TALENs- this system is comprised of nonspecific nuclease, guided by modified binding domains), and CRISPR/Cas9 technique. Several studies have proved that CRISPR/Cas9 is one of the most promising of all gene editing technologies, utilized for deletion of HIV coreceptors on targeted cells. This technique has high-efficiency performance in vitro in both editing and delivery.

An individual with a homozygous 32-bp deletion of the CCR5 gene (CCR5Δ32) has a natural resistance to HIV. Using this as a reference scientists have utilized the CRISPR/cas9 technique to generate CCR5Δ32 mutations by generating biallelic (both the alleles of a gene) mutations in the CCR5 gene. In vitro studies have proven that CRISPR/Cas9 is delivered into CD4 cells via a lentivirus vector. These modified cells have further shown resistance to HIV. Similarly, inhibition of CXCR4 expression has proved to be fruitful towards inhibiting HIV entry into the cells. However, inhibition of CXCR4 expression still needs to be investigated further for better results. A recent in vitro study has been successful in deleting both CCR5 and CXCR4 HIV coreceptors via the CRISPR/Cas9 technique. 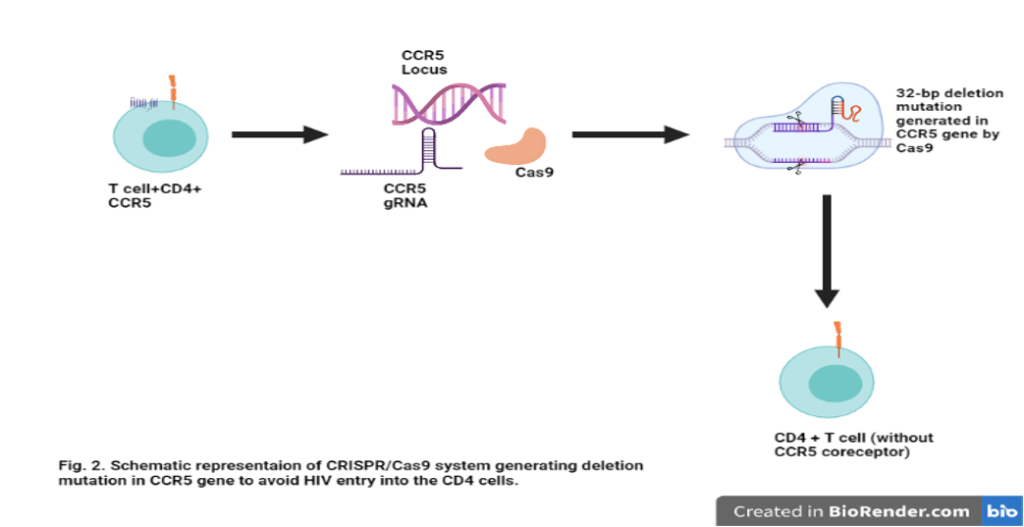 Although CRISPR/Cas9 technology has been showing positive results it still lacks extensive animal model verification. A considerable amount of research is being done on humanized mouse models and in not more than a decade CRISPR/Cas9 technique might lead us to thrilling and promising progress in evading HIV.