Biotechnology isn’t just limited to tech, drugs, vaccines, genetics-it also involves sitting next to a doctor’s chair to understand the technology he needs. As an engineer we tend to limit ourselves to a very mechanical course of dealing with a problem- limiting ourselves to the set boundaries of our field. However, going out in the field and understanding how our consumers function- that is what makes a research complete. In this article, I explore diagnosis of autism not with machines and technology, but with methodology and understanding.

Autism spectrum disorder (ASD) is a developmental disorder that affects communication and behavior. It is not the presence of a disease but the absence of normal. The term “Spectrum” refers to the wide range of symptoms, skills, and levels of disability in functioning that can occur in people with ASD.

Scientists believe that both genetics and environment likely play a role in ASD. There is great concern that rates of autism have been increasing in recent decades without full explanation as to why. Researchers have identified a number of genes associated with the disorder. Imaging studies of people with ASD have found differences in the development of several regions of the brain. Studies suggest that ASD could be a result of disruptions in normal brain growth very early in development. These disruptions may be the result of defects in genes that control brain development and regulate how brain cells communicate with each other. Autism is more common in children born prematurely. Environmental factors may also play a role in gene function and development, but no specific environmental causes have yet been identified. About 10–30% of autism cases are now attributed to rare disruptive genetic variants, including copy number variants (CNVs) and single nucleotide variants (SNVs). 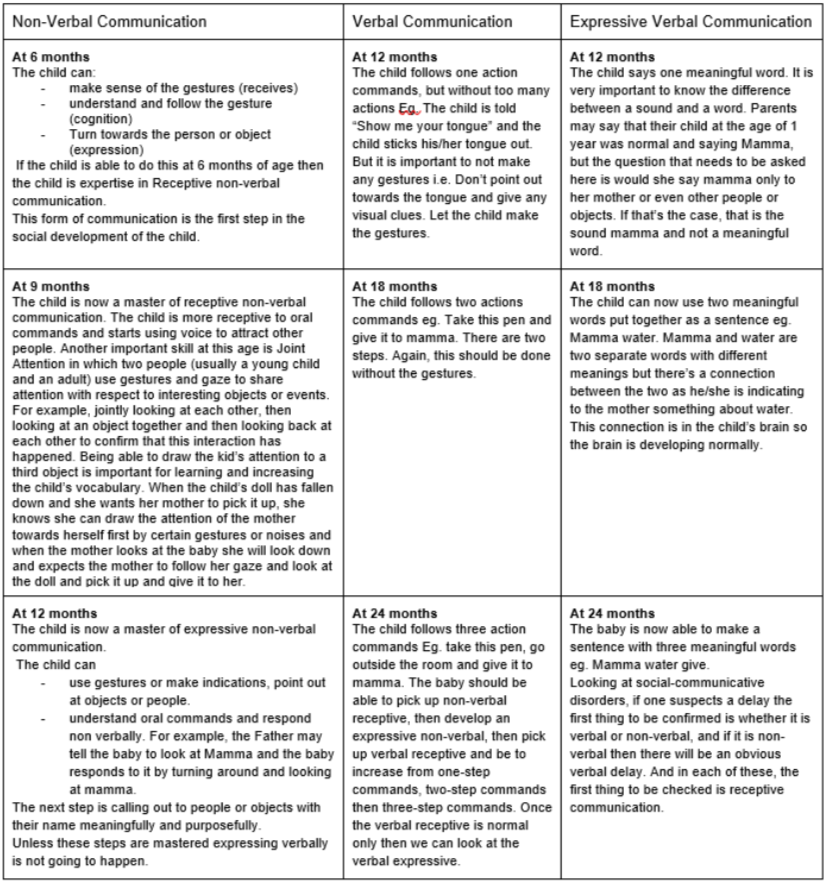 1. Neologism: The child says nonsense words, makes some humming sounds or meaningless sounds.
2. Echolalia: Meaningless repetition of words. Eg. You ask the baby “what is your name?” and instead of answering the question the baby repeats the question or a part of it meaninglessly. The baby is picking up some sounds from the sentence but is not understanding what the words mean. The child may recite the entire poem, but that is only because the child is just repeating what he/she is made to hear.
3. Lack of joint attention: Parents’ and children’s coordinated attention to each other and to a third object or event.
4. Lack of symbolic play: By this age the child understands symbols, like waving a “bye-bye”, at the same time symbolic play could also be the child playing with a doll. The child imagines the doll to be a real child and treating the doll as a human child.
5. Covey needs by pointing or dragging beyond 2 years: If the child points out at an object he/she wants at the age of 1 year it is very good, but not at 3 years of age. By now the child should have at least learned symbolic play or verbal communication which is even better. Pointing beyond two years shows that there is a break in the child’s social communicative development.
6. Repetitive behaviors: These are similar to echolalia, which is verbal. Repetitive behaviors are repetitive actions that the child has seen or wants to do. Eg. the child repeatedly keeps flapping his/her hands
7. Restricted actions: The child is restricted to only one part of the object. For example, when the child does not understand symbolic play he/she will not associate a toy car with a real car and play or pretend to drive it. The child gets restricted to only one part like maybe will focus only on the wheels and will upturn the car instead of keeping the four wheels on the ground and taking it along the road. This shows that the child does not understand the meaning of it.

Main questions to be asked for detection of social-communicative disorders 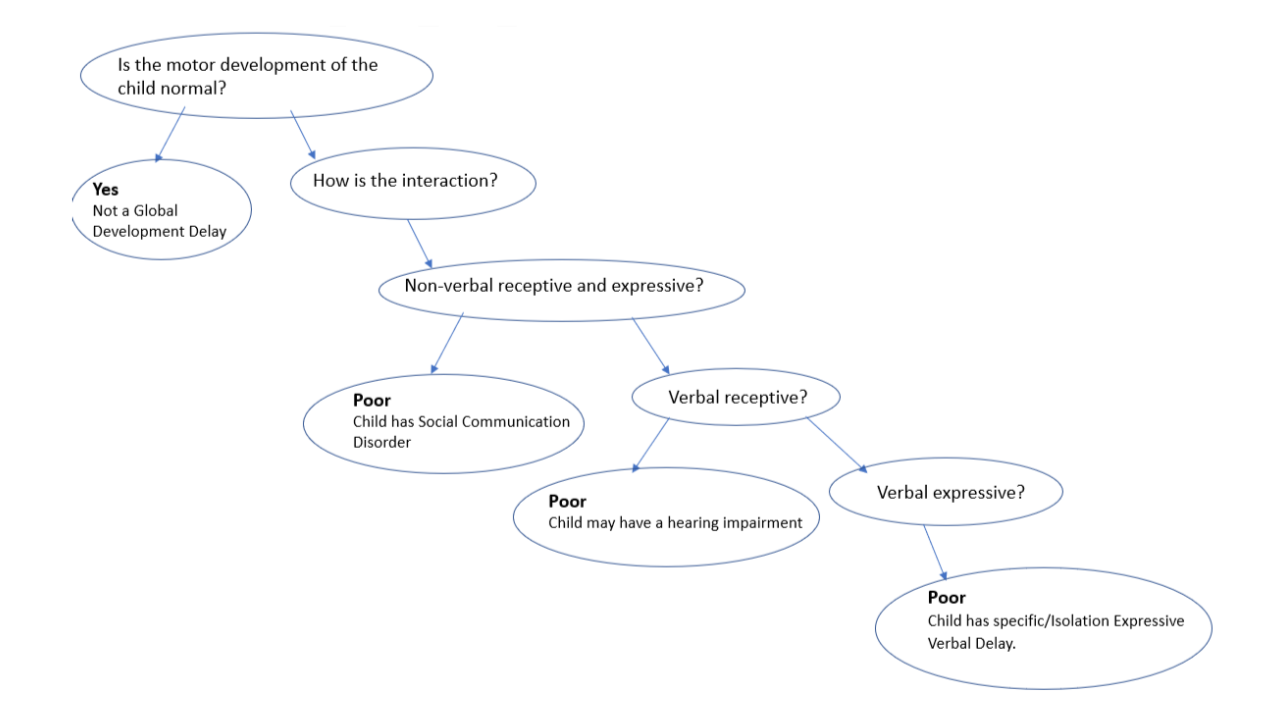 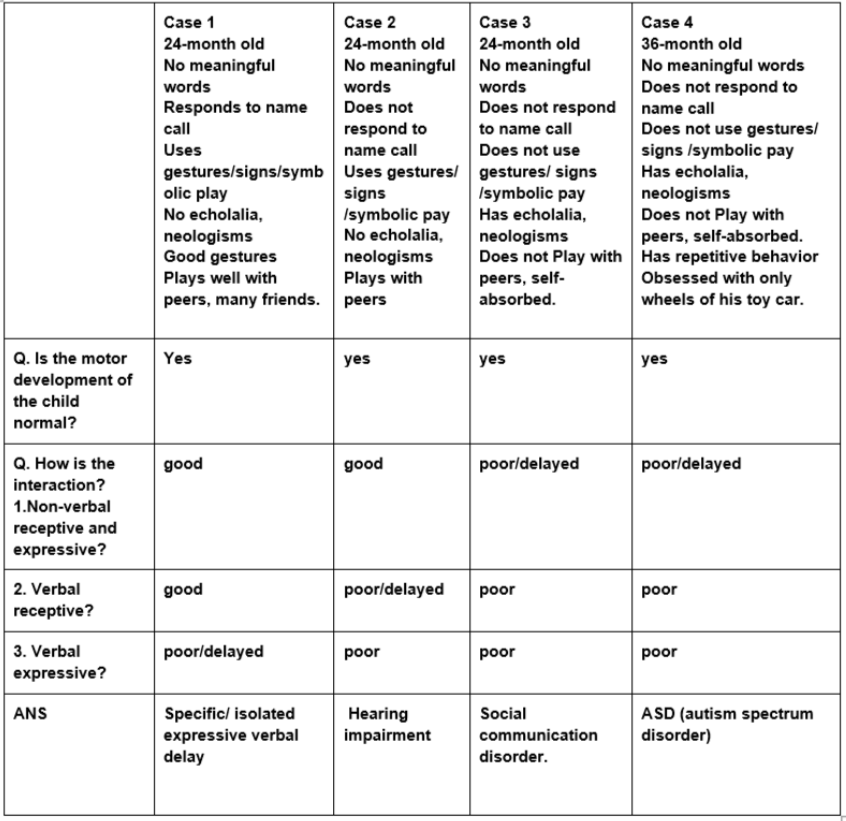