Curcumin- Indian spice to Anticancer Agent
Curcumin has been widely utilized in the treatment of a variety of diseases for hundreds of years, with chemical evidence dating back over 2500 years in Asia, particularly in ancient Indian medicines (Ayurveda). Curcumin’s recent breakthrough demonstrates that it has a wide range of uses in terms of determining cellular targets and the multiple molecular pathways involved in curcumin. Its inhibitor, medicine, anticancer, antigrowth, antiarthritic, antiatherosclerotic, medicine, antiaging, medicinal medication, antibacterial, wound healing, and memory-enhancing actions have earned it a lot of attention. Curcumin has shown promising anti-malignant tumor effects in vitro and in vivo in a variety of cancers, including adenocarcinoma, carcinoma, large intestine cancer, carcinoma, and head and neck cancer.
Curcumin as an Anticancer Agent

Curcumin is the most important component of turmeric L. (turmeric) rhizomes, and it was isolated from the turmeric plant in a pure crystalline form for the first time in 1870. Curcumin is an inexpensive, easily accessible, and low-toxicity ingredient, making it an ideal chemopreventive agent. Curcumin has been listed as one of the most promising chemopreventive medicines by the National Cancer Institute of the United States of America since the 1980s, and it has been tested in clinical trials.

How does it work?

Curcumin regulates the cell cycle and induces apoptosis by upregulating the proteins p16 and p53. Curcumin also inhibits NF-B activation by inhibiting IκKB activity, which leads to the reduction of numerous NF-B-regulated genes involved in carcinogenesis, including TNF, COX-2, cyclin D1, c-myc, and MMP-9 interleukins. Curcumin also modulates autophagy and has inhibitory effects on tumor angiogenesis and metastasis by suppressing several growth factors such as VEGF, COX-2, MMPs, and ICAMs. Various routes of anticancer action of turmeric are shown in Figure 1. 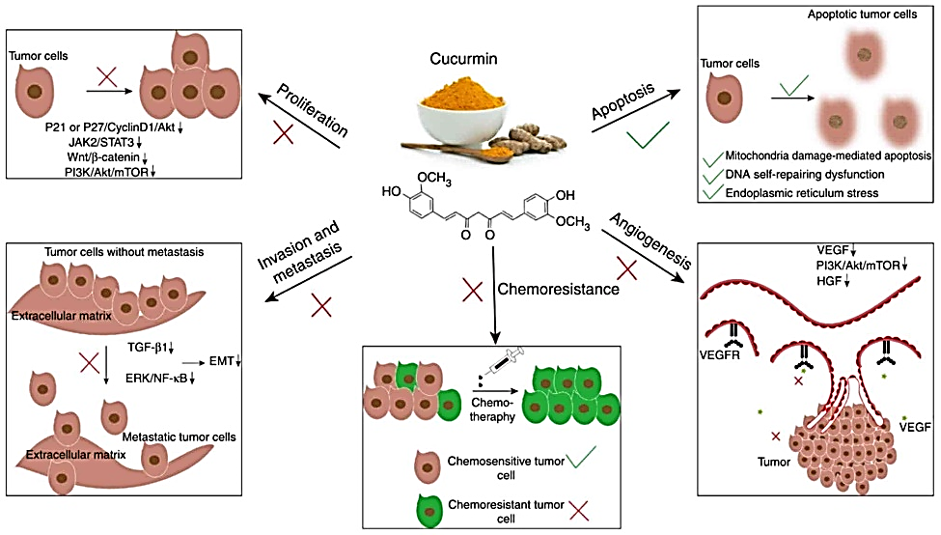 Kuttan and colleagues conducted the first clinical trial on curcumin in 1987, enrolling 62 patients with external malignant tumors to investigate its anti-cancer potential. Too far, approximately 6000 human subjects have participated in over a hundred and twenty clinical trials, all of which have been successful. Curcumin is a well-established malignant tumor agent in vitro, but its efficacy in clinical trials has yet to be proven. Curcumin’s poor bioavailability is the main cause of its lack of potency in clinical trials. Several studies have shown that delivering curcumin via nanoparticle drug carriers improves bioavailability.

Despite significant efforts to improve the chemistry and biological properties of curcumin, there are still many issues to be resolved in terms of bioavailability, potency, and tissue selectivity. Curcumin derivatives do not appear to be less assailable than curcumin itself, even though medicinal chemistry methods to improve its pharmacologic qualities have not been successful.

The compound nanoparticles used to improve curcumin’s biological activity are one of the most commonly employed curcumin delivery strategies. Because of their low toxicity, biocompatible and perishable polymers are ideal for drug delivery systems. Perishable synthetic polymers such as PLGA (poly (d, l-lactic-co-glycolic acid) and natural polymers such as silk fibroin and chitosan are widely used in drug delivery as an outcome.

Nanoscale liposomes, on the other hand, are rapidly becoming one of the most effective drug delivery platforms for anticancer drugs. Curcumin is encapsulated via a variety of cyst preparations. Nanogels have received a lot of attention in recent years as a viable drug delivery mechanism, but just a few research have looked into curcumin-nanogel delivery in cancer therapy.

The majority of curcumin drug delivery methods currently in development lack tissue targeting. As a result, there’s still a lot of room for advancement in terms of selectivity for specific tumor tissues in curcumin delivery systems. Tissue-specific curcumin administration increases native drug concentrations in the site of action, resulting in greater efficacy (with lower curcumin dosages) and fewer side effects.

Postpartum Depression: The Obscure Side Of Parenthood