Infectious diseases are a prime cause of death worldwide and sometimes/often result in a pandemic situation, if not kept in check. Right now the world is facing one such situation, in the form of Covid 19. It is thus very important that proper diagnostics and fast treatment is available for such diseases. One such method of molecular diagnostics is the use CRISPR Cas protein system. At the molecular level, CRISPR-Cas systems function through the processes of adaption (acclimatization), crRNA maturation, and interference with significant biological diversity across systems. The different Cas proteins used have provided a great advantage in the development of accurate and sensitive diagnostic methods in association with technologies of signal amplification and fluorescent, potentiometric, colorimetric, or lateral flow assay detection. This method has the potential to dramatically change the diagnosis rate by making it easily available at an affordable rate practically anywhere in the world. 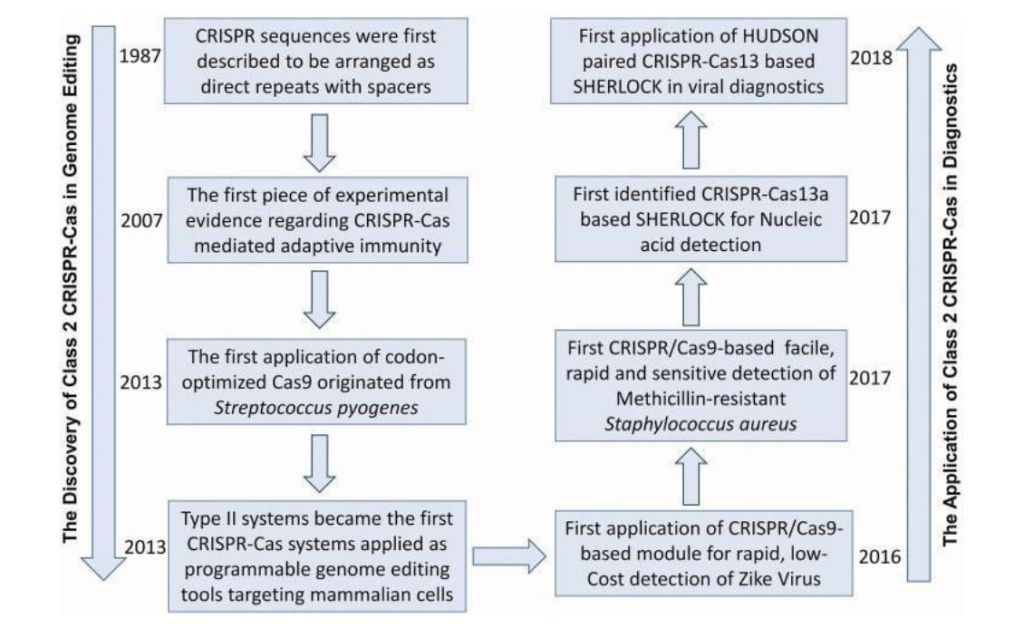 Fig.1. The advance of Class 2 CRISPR-Cas based genomic editing and application in diagnostics

The two CRISPR methods currently used as diagnostic are the canonical Cas9 protein of type II CRISPR-Cas systems along with its modified nucleolytically null/dead, Cas9 (dCas9) protein, and the use of the collateral activity of Cas12, Cas13. Today, many modifications and improvements have been introduced into the system, but the core concept remains unaltered.

Diagnostics using CRISPR-Cas9: CRISPR-Cas9 has been used many times for developing infectious disease diagnostics. Pardee et al., in 2016, utilized nucleic acid sequence-based amplification (NASBA), along with CRISPR-Cas9 to differentiate accurately between closely related Zika virus strains in a macaque model and in-vitro. They attached a synthetic trigger sequence to NASBA-amplified viral RNA and used a sgRNA-Cas9 complex to cleave the resulting dsDNA. The absence or presence of a strain-specific protospacer adjacent motif (PAM) resulted in truncated or full-length DNA fragments upon Cas9 cleavage. Only full-length strands activated the trigger switch, which caused a color change on a paper disc, allowing definitive strain differentiation. Later, Muller et al. combined CRISPR-Cas9 with optical DNA mapping to recognize bacterial antibiotic resistance genes. Here, a guide RNA (gRNA)-Cas9 complex binds and cleaves specific nucleic acid sequences of plasmids containing resistance genes, and a fluorescent dye (YOYO-1) and netropsin independently bind DNA based on AT region selectivity, developing into an emission intensity unique to each DNA segment, similar to a bar code. Through this, the authors were able to distinguish between plasmids producing various extended-spectrum β-lactamases (ESBLs), including cefotaxime 15 (CTX-M-15), CTX-M-14, and carbapenemases including Klebsiella pneumoniae carbapenemase (KPC) and New Delhi metallo-_-lactamase 1 (NDM-1). The addition of multiple crRNAs allowed the detection of various resistance genes within the same reaction. 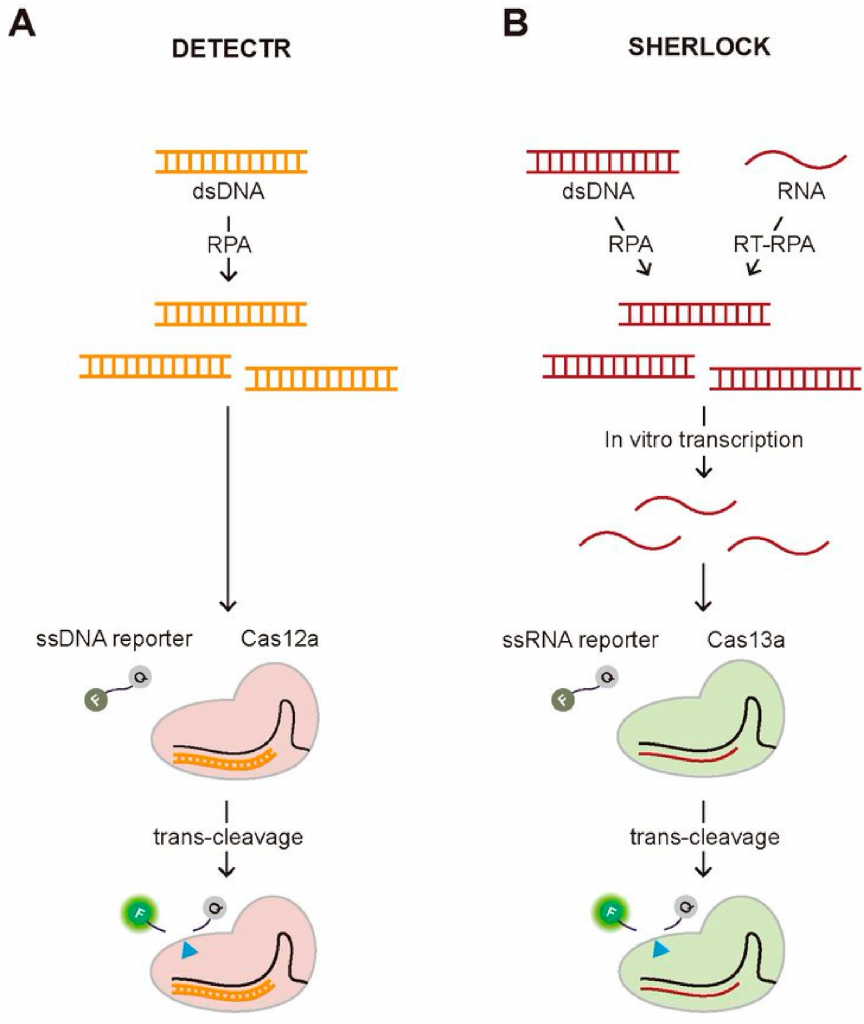 In 2018, Doudna and colleagues showed another CRISPR-Cas diagnostic platform named DNA endonuclease-targeted CRISPR trans reporter (DETECTR). This technology relies on the collateral activity of Cas12a protein that activates after recognition of target RNA by Cas12a. They exploited the property of Cas12a protein from Lachnospiraceae bacterium ND2006(LbCas12a) that exhibits non-specific collateral activity and degrades all other adjacent DNA molecules on recognizing target RNA.

If the reaction with Cas12a protein and targeting crRNA is complemented by probes before mixing with the biological sample, crRNA-dependent recognition of pathogenic nucleic acids by Cas12a switches on collateral activity that damages DNA probes. DNA probes designed are similar to conventional TaqMan probes. Degradation of the DNA probes results in a release of fluorophores which in turn results in stable and strong fluorescent signals that are detected by a fluorimeter. Also, DETECTR has been combined with an isothermal pre-amplification step to enrich target sequences (RPA).

RPA enhances the analytical sensitivity of the test and also helps in avoiding the need for sophisticated and expensive equipment.

Nucleic acids are the main target of the CRISPR-Cas system, so various forms of nucleic acids such as genomic DNA, mRNA, miRNA, SNP, and methylated DNA that relate to diseases have been successfully detected and quantified by combining the CRISPR-Cas system with target amplification. Moreover, several recent approaches have been reported to be capable of detecting non-nucleic acids or free of target amplification even though the majority of CRISPR-based diagnostics targets nucleic acids that need to be amplified using various amplification techniques, including PCR, RPA, EXPAR, and so on. The easily programmable character of CRISPR-Cas makes it to detect any gene of interest, allowing to develop of several diagnostic tools for SARS-CoV-2 as well. The diagnostic tool based on the CRISPR-Cas system could be the next-generation standard due to its programmability and capability of searching for the target sequence quickly and specifically even in the genomic DNA.