We all have extensively learned about marijuana as a drug at some point in our lives. Its consumption is known to cause intoxicating effects on individuals.

But did you know, several notable scientists and doctors have dedicated their lives to research and understanding the uses of this herb that once held significance in the community for medical benefits.

Now we all would agree that cannabis somehow affects the brain and the neural systems since its most obvious and harmful effect is its ability to intoxicate. After decades of research, a whole new system was discovered that reacted with the active compounds of cannabis called the cannabinoids and thus was named ‘The Endocannabinoid System’. This unique system of the brain and body affects various vital regulatory functions.

Cannabis is a genus of flowering plants of the family Cannabaceae with over 650 species. Three species recognized as Cannabis sativa, Cannabis indica, and Cannabis ruderalis can be dealt with as subspecies of a single species, C. sativa. The genus is broadly universal for being indigenous to and originating from Central Asia.

Now, there are approximately 540 chemical compounds identified within the plant out of which 60-100 are termed cannabinoids. Cannabinoids and terpenes develop in the resin glands, or trichomes, at the flower and leaves of the cannabis plant. The primary and relatively vital ones being THC (tetrahydrocannabinol) and CBD (cannabidiol).

The Endocannabinoid system or ECS is an actively complicated cell signaling system. It maintains the homeostasis of cellular messages through the regulation of neurotransmitters, playing a crucial role in pain sensitivity and the immune system. The main components of ECS consist of endocannabinoids, cannabinoid receptors, and enzymes.

Endocannabinoids: These are endogenous lipid-based naturally occurring neurotransmitters that engage cannabinoid receptors. The two mainly identified endocannabinoids are anandamide and 2-AG. Their precursors are present in the lipid membranes. They are liberated into the extracellular space on-demand as opposed to other neurotransmitters which are synthesized ahead of time and are stored in synaptic vesicles.

Enzymes: These breakdown endocannabinoids after carrying out a response that is needed. There are 2 main enzymes fatty acid amide hydrolase ( breakdown anandamide) and monoacylglycerol acid lipase (breakdown 2-AG). 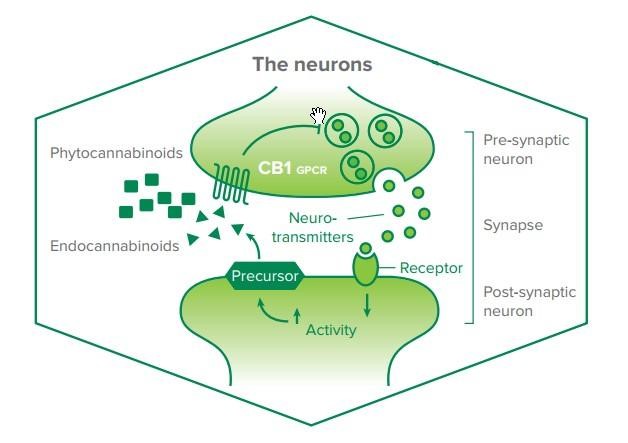 To explain the mechanism of ECS in simple words:
In the event of signal transmission, the brain releases neurotransmitters (GABA, serotonin, norepinephrine) which are received by the cell and further passed on to the next cell. However, if the message sent is “off” which is usually a neuroexcitation, the cell gets perturbed. Calcium rushes in signaling the body to secrete its endocannabinoid. Endocannabinoid binds with cannabinoid receptor which signals the neurotransmitters to stop.

A negative feedback loop is achieved by activating a postsynaptic neuron which synthesizes and releases endocannabinoids as they target cannabinoid receptors. For instance, in case of seizures, anxiety attacks, and nausea caused by chemotherapy or pain, the cell wants to send a message backward to turn it off. Binding and stimulating CB1 receptors in instances of pain will up-regulate GABA neurotransmitters, thus reducing the pain signals through the brain.

By targeting the cannabinoid receptors in the ECS, the plant compounds can bring in their therapeutic effects by causing an “override” signal.

THC is the only psychoactive component. In very rare cases, extremely high doses could cause hallucinations. The main concern usually is substance abuse. Marijuana smokers undergo dependency. The brain stops the production of endocannabinoid receptors due to which irritability, mood swings, and sleep problems are caused after terminating use. This is however different than addiction. There is lesser data available for studies on addiction to cannabis.

While unearthing metabolic pathways of phytocannabinoids scientists discovered one of the most important molecular signaling systems of the body that is responsible for a wide range of regulatory functions and homeostasis of the body. Phytocannabinoids can mimic human endogenous functions, making them a very powerful tool for the correction of disorders of the brain and neural connections. Due to the nature of the rate of degradation of cannabinoids, it does not have many long-term side effects, unlike the other drugs on the market. Cannabis holds immense potential in finding relief and even cure to various diseases.