Biopiracy as the name suggests is the unauthorized use or reproduction of other’s work. It can be defined as the exploitation of biological or genetic material as medicinal extracts without giving any credit to the indigenous people or country from which the knowledge is obtained. In India, there is no specific law that can protect our traditional knowledge. However, the provisions of Intellectual Property Law can cater to the protection of our biodiversity and genetic resources. There are many laws that are protecting our indigenous knowledge for instance the patents act 1970 as amended by the patents second amendment act 2002 provides that the applicant must disclose the source and geographical origin of any biological material. Under section 3 (p) of the act, an invention that has amalgamation or duplication of known properties of traditionally known components cannot be patented. The law that is more relevant for the protection of Traditional Knowledge, is the Geographical Indications of Goods (Registration and Protection) Act, 1999 which aims at registration and better protection of geographical indications relating to goods.

The main objective of the law is to prevent unauthorized persons from misusing geographical indications. This can be explained by taking the example of the Neem Controversy. In 1994, the European Patent Office (EPO) granted a process patent to the US Corporation WR Grace and the US Department of Agriculture USDA over a method for controlling fungi on plants by the aid of a hydrophobic extract of Neem oil. This patent was challenged by a group of non-government organization (NGO) in India and the European Union in 1995. They submitted evidence to the effect that the fungicidal effects of Neem seed extracts were known to and used by agriculturalists all over India and further claimed the invention did not fulfil the criteria of novelty or inventive step. After reviewing the evidence submitted by the NGO’s the EPO panel accepted that neem had been used in India for many years. Finally, on 30th September 1997, the European Patent Office (EPO) delivered a favorable judgement. There are many other controversies of traditional knowledge that needs protection from being biopirated some include The Turmeric Controversy, Hoodia Cactus Controversy, The Basmati Case and so on. In order to protect our country or as such any other country’s Traditional Knowledge effectively, and to put an end to Biopiracy. The following measures can be taken care of. 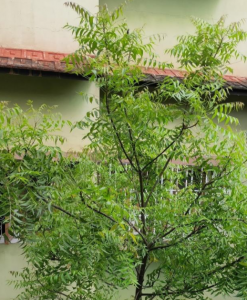 Here’s a photograph of a 49 feet- tall Neem Tree that grew near my place. It has been a savior during these tough times. As shops were closed amid the pandemic-induced lockdown, it was difficult to buy cosmetics. After a brief research, I was able to use every part of the tree for my healthcare regime. I use it in my face pack, hair oil, cuisines, dental healthcare, and mosquito repellant. In Sanskrit, the neem tree is called as Arista which means perfect, complete and imperishable. It has antiseptic, antiviral, antipyretic, anti-inflammatory, antiulcer and antifungal properties.

At a time when ‘vocal for local’ is the talk of the town, we should think of ways to commercialize our indigenous knowledge. The fact here is, if we do not stand for our traditional knowledge, who will?